The sun rises over the rocky hill slopes and slants through the leaves of the tall Sal forest. Thick bamboo groves flourish as rivulets rush through the park, making Bandhavgarh one of the prettiest forests in India. Situated in Madhya Pradesh, Bandhavgarh is a key tiger habitat in the jungles of Central India. Located in the midst of the Vindhya range, the park is surrounded by steep cliffs and rocky hill slopes.

Wake up to a chorus of birdsong and head out on a thrilling game drive into prime tiger territory. The forest teems with a variety of flora and fauna. From felines to wild dogs, herds of wild elephants, black-faced langur, Sambhar, barking deer, Barasingha (swamp deer), and the Gaur (Indian Bison) are just a few of the animals that you’re likely to observe in their natural habitat. The park is named for Bandhavgarh Hill which towers over it, and an ancient fortress which lies at its peak. Bandhav means brother and Garh means fort. According to an ancient legend, Lord ‘Rama’ gifted this fort to his brother ‘Lakshman’, for the pivotal role that Lakshman played in the battle of Lanka.

The Ultimate Travelling Camp offers a sophisticated canvas-top safari experience in the heart of Bandhavgarh. Our luxury tented camp, called TheUnTamedBandhavgarh, is an ideal base from where you can explore the beauty of this forest. Tastefully designed and fully equipped, each tent comes with a private sit-out, as well as butler service. Vast and elegant, each tent has large netted windows, a writing desk with stationary, and fresh, crisp linens. En-suite bathrooms have their own shower cubicle, with hot and cold running water, a hair dryer, and Ayurvedic toiletries. Spacious wardrobes include a safe, and also come with thoughtful amenities like bedroom slippers, eye masks and ear plugs. Guests can also avail of our laundry service. Each tent also has its own mini-fridge, as well as tea and coffee making facilities. 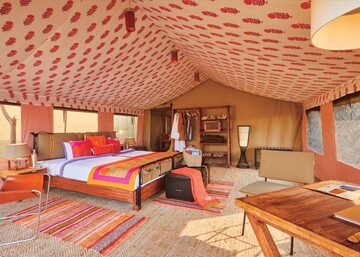 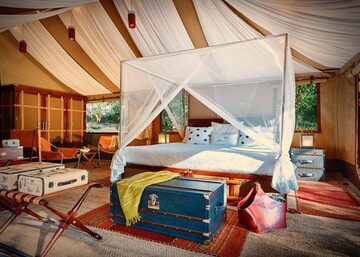