Bhutan is rightly known to the world today as the last Shangri-La. If there is a place on earth that even the most seasoned travelers consider a privilege to visit, it is indeed BHUTAN. The few lucky visitors, who make the lifetime journey to this extraordinary land, realize that there is no other destination like this land of pure and exotic mysticism.

It was the mighty Himalayas that protected Bhutan from the rest of the world and left this Himalayan Jewel blissfully untouched. The Drukpa Kagyupa sect of Mahayana Buddhism provided the essence of a rich culture and fascinating history. The Bhutanese people protected this sacred heritage and unique identity for centuries by choosing to remain in a jealously guarded isolation.

Druk Yul or the ‘Land of Thunder Dragon’ as referred by its natives, the princely Kingdom of Bhutan is a landlocked country, encompassing an area of 38,394 square kilometers. Located between longitude 88045’ and 92010’ East and latitudes 26040’ and 28015’ North in the Eastern Himalayas, it is bordered by India in South and South-West and Tibetan autonomous region of China in the North and North-West respectively. Virtually the entire country is mountaineous, and ranges in elevation from 240m along the Indian border to the 7,554m, Kulha Gangri peak on the Tibetan border. These two extremes frame a landscape which stretches from sub-tropical to arctic like conditions.

With a relatively small population of 7,35,553 people, the Bhutanese enjoy a sustainable lifestyle which they inherited from their forefathers. Bhutan’s population is, in many ways, one large family. About 70 percent of the people still live on subsistence farming, scattered in sparsely populated villages, across the rugged terrain of the Himalayas. Buddhism, prevalent in the country since the 7th century, continues to play an important role in their peaceful lives. 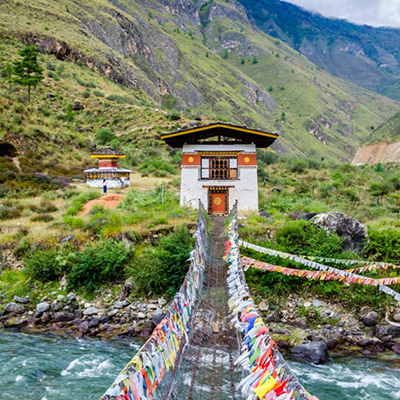 The varied altitudes across the country lead to constant temperature change as you traverse between various Dzongkhags (districts).

The country shares a tropical southern border with India whereas on the other hand, steep slopes climb to snow-capped heights of over 24,750 feet / 7,500m in the north sharing borders with Tibet. Consequently, temperatures vary greatly between day and night and at different altitudes. While travelling layered clothing is recommended for the rapidly changing climatic conditions.

In the central valleys, the summer rains are not as heavy as in the south. It rains mostly in the late afternoon and at night. From mid-May to the end of September, the weather is warm at night (60-64F/17-18C) and in the day (72-78F/22-26C). In winter, the sky is bright, and it is sunny but cold, especially when the sun hides behind the mountains in the mornings and evenings. At night, the temperature falls below zero. Spring and Autumn are very pleasant with warm days and cool nights.

Bhutanese people can be generally categorized into three main ethnic groups. The Tshanglas, Ngalops and the Lhotshampas. The other minority groups are the Bumthaps and the Khengpas of Central Bhutan, the Kurtoeps in Lhuentse, the Brokpas and the Bramis of Merak and Sakteng in eastern Bhutan, the Doyas of Samtse and finally the Monpas of Rukha villages in WangduePhodrang. Together the multiethnic Bhutanese population number just over 700,000.

Bhutanese society is free of class or a caste system. Slavery was abolished by the Third King Jigme Dorji Wangchuck in the early 1950s through a royal edict. Though, a few organizations to empower women were established in the past, Bhutanese society has always maintained relative gender equality. In general our nation is an open and a good-spirited society.

The array of flora and fauna available in Bhutan is unparalleled due to conservation and its wide altitudinal and climatic range. Physically, the country can be divided into three zones:

Economists all over the world have argued that the key to happiness is obtaining and..enjoying… material development..Bhutan however, adheres to a very different belief and.advocates that… amassing material wealth does not necessarily lead to happiness. Bhutan is.now trying to.measure… progress not by the popular idea of Gross Domestic Product but through Gross National… Happiness.
While conventional development models stressed on economic growth as the ultimate.objective,… the.concept of Gross National Happiness is based on the premise that true development of human… society takes place when material and spiritual development occur side by side to complement and… reinforce each other.
Bhutan Tour Packages
© 2019 Truly India. All Rights Reserved.
Follow Us On
We use cookies to ensure that we give you the best experience on our website. If you continue to use this site we will assume that you are happy with it.Accept