When you book with an account, you will be able to track your payment status, track the confirmation and you can also rate the tour after you finished the tour.
Sign Up
433
DetailRoomsOffersPhotos

Ayurveda, the most sought after science of life today, is the most ancient healing modality upon this planet Earth! Here at Punarnava Ayurveda Hospital, we practice this age old wisdom in its pristine form. In fact, the word Punarnava means renewed. We call our treatment modality as ‘Precise Ayurveda’- as we incorporate the latest advancement in medical science to make the diagnosis fool proof. Ever since its inception in 1990 in Kerala, the Gods own country- Punarnava Ayurveda hospital has been in the forefront to provide the best Ayurveda treatment services against a wide range of diseases. The success rate in certain difficult to treat cases made Punarnava the best sought after one in Kerala. Punarnava – ISO 9001-2008 certified and also has Green leaf accreditation, which is the highest in the category from the Kerala governments Department of Tourism. 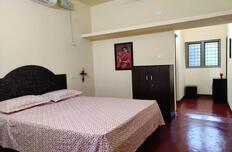