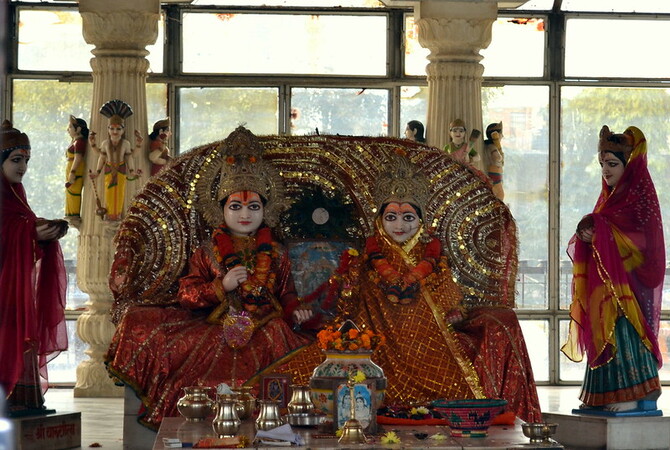 Vivah Panchami, also referred as Ram Vivah or Ram-Sita Vivah, is an important festival in India celebrated to commemorate the marriage anniversary of Lord Ram and Sita Mata. The festival is celebrated on the fifth day of the Shukla Paksha during the month of Margashirsha, which usually falls in the month of December. The date is fixed as per Hindu Panchang. The festival is a grand one, like all major Hindu festivals in India. It is a popular temple festival held in all Ram temples of India, and holy places related to Sri Rama in the Mithila region of India and Nepal. Orchha in Madhya Pradesh deserves special mention for the Ram Vivah Festival. In Orchha, Ram Vivah has been celebrated since a long period of time by the locals out there. In each passing year, the celebration has become more and more popular, enticing the people from other parts of India to visit this historical place. Vivah Panchami Festival is celebrated with great pomp and fervour at Ram Raja Temple in Orchha. Vivah Panchami 2023 date is 17th December 2023.

The celebrations of Dussehra in Kullu started way back in the 17th century during the rule of Raja Jagat Singh. He had once taken away a bag full of magical pearls from a poor Brahmin, who burnt himself and died and cursed Jagat Singh. The brahmin cursed him that whenever he eats, his rice will appear as worms, and water will appear as blood. King Jagat Singh thus could see only worms and blood and fell ill seriously. To get rid of the curse, the king, got a rare idol of Lord Rama from Ayodhya and this was installed in Raghunath temple at Sultanpur. Lord Raghunath thus became the reigning deity of the Kullu valley and all deities accepted the overall lordship of Lord Raghunath. It is believed that all the deities of the Kullu region assemble at Kullu and pay their homage to the chief deity on Dussehra.

Another legend says that when Maharishi Jamdagni, was returning from Kailash, he had with a basket with images of eighteen different Gods. While he was crossing the Chanderkhani pass, there was a horrible storm which led to the scattering of all the Gods’ images across the Kullu valley. The locals saw these images being converted into forms of Gods on their own. This led to Kullu valley to be named as “Valley of Gods”. And Kullu Dussehra is celebrated to worship these scattered Gods’ images with great pomp and show.

Orchha is an important historical site built by the Bundela ruler Rudra Pratap in the state of Madhya Pradesh. This small place has in its ambit the interesting Bundela-era legends, with many ancient temples, monuments and forts, which make it a popular tourist destination of Madhya Pradesh. The famous Ram Raja Temple is located in Orchha and it is the only temple where Lord Ram is revered both as a king and a God.

Lore Rama is believed to be the seventh and one of the most popular avatars of Lord Vishnu. The day of Vivah Panchami is considered a very special day in Hindu religion as it is believed to be the day when Lord Ram got married to Sita. This was a tradition that started almost 500 years back and people of Orchha looks forward to this festive enthusiastically every year. Ram Sita’s wedding is celebrated with great pomp and vigour, as this marriage signify courage, commitment, duties and love for the Hindus.

Vivah Panchami’s celebration preparations start several days before. It is considered as a family wedding by the locals, and hence preparations start as similar to Hindu weddings. Devotees take part in all the essential wedding rituals and ceremonies that usually take place in a Hindu family wedding. People celebrate this festival with great enthusiasm. A large number of pilgrims and tourists from different parts of India, the locals and people from nearby areas, gather in Orchha to celebrate the holy wedding and have a feast.
• The whole of Orchha comes to life during the festival. The entire place is beautifully decorated.
• Raja Ram Temple is beautifully decorated with lights, diyas, lamps and flower garlands and it wears a festive look during the festival time.
• Ram Sita idols are purified with holy water and then their old clothes and jewelleries are replaced with new ones. The idols are embellished with decorative accessories and the appearance is that of a new bride and a bridegroom. The idols of Ram and Site are reinstalled with proper shloks and mantras.
• A highlighting event of Ram Vivah is the ceremonial procession carried out from the Ram Raja Temple towards Janaki Nagari. The procession is carried out by the priests of the temple, accompanied by music bands, dancers, adorned chariots pulled by beautifully decorated horses and hordes of devotees. The cultural procession passes through the streets and lanes of Orchha and then it comes back to the Raja Ram Temple.
• At the right mahurat as per Hindu Panchang, the priests in the temple perform the wedding rituals in the temple complex as per Hindu marriage and Vedic rites. This is attended by all devotees, the locals and the tourists. It is customary to read from the sacred Baal-Kand script, the ‘Vivah Prasang.’
• Many devotees also recite the Ramcharitmana on this day which is believed to grant a happy and prosperous family life.
• Bhajan Kirtan and Prayers continue the whole night in the Temple.
• Prasad is prepared and once the wedding rituals are over, there is arti and Bhog prasad is offered to the deities. The celebrations come to an end with the offering of Bhog Prasad to all the assembled people in the temple.
It is indeed a wonderful experience to witness the vibrant rituals and ceremonial functions of Lord Ram and Mata Sita’s wedding. The spectacular wedding of Raja Ram is not to be missed in one’s lifetime. It is said that people participating and witnessing this wedding are blessed with a happy marital life. A tour to the ancient Historic place Orchha in Madhya Pradhesh is a must. Book your tour to Madhya Pradesh during Ram Vivah with the best inbound tour operator in India. Making a Tour to Orchha, Madhya Pradesh during the festival time will definitely give you an exhilarating experience to witness the grand celebrations of the wedding of Lord Ram and Mata Sita.