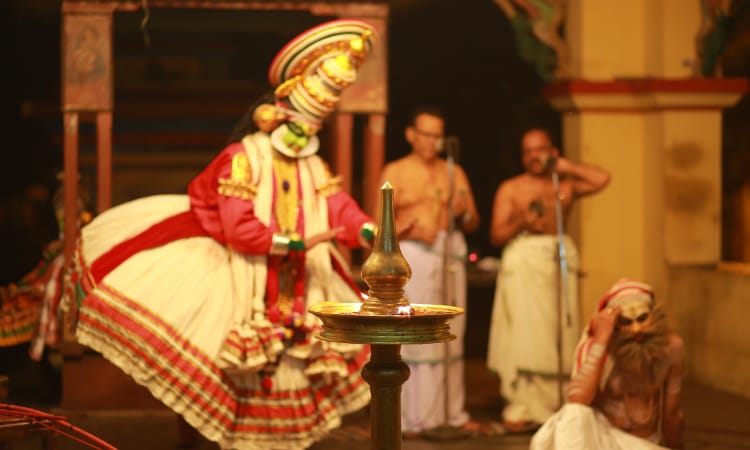 The Thirunelli Vishu festival is not only associated with the commencement of the harvest season and new year celebrations, it also has great religious significances.
As per legends, the temple was built by Lord Brahma. Once Lord Brahma saw an idol of Lord Vishnu in the valley of Thirunelli, and thus a temple was built in that location. The temple is considered very auspicious as you can pray for the peace and salvation of departed souls here because it is believed that Lord Ram and his brother Laxman performed Pithrukarma here. Pithrukarma is a ritual performed for a deceased person so that the soul attains liberation. There is a holy mountain spring referred as Papanasini near the shrine. A holy dip in its crystal-clear spring water is believed to have divine power for one’s sins atonement. There is also a sacred rock nearby where ritual offerings are made for the ancestors. The shrine at the temple has 30 granite columns surrounding it and the ground is paved with large square pieces of granite. There are footprints engravings on a boulder which are considered to be the footsteps of Lord Vishnu, and thus considered to be holy.
The temple is a popular architectural beauty of Kerala, which makes it an important tourist spot of Wayanad. Thirunelli Vishnu Temple sees a huge throng of devotees and tourists during Thirunelli Vishu Festival.

• On Vishu day, the whole temple complex is beautifully decorated with flowers, lights and lamps. The entire temple looks just splendid when the architectural carvings of the temple become more prominent and visible with lighting effects. Everywhere around there is a festive mood. It is Vishu after all, the new year for Keralites. All people visit the Thirunelli Temple to offer their prayers because it is considered auspicious to pray to Lord Vishnu, the presiding deity of the temple.
• Many take a dip in the mountain spring Papanasini.
• There are many devotees who come to the temple on Vishu day to offer prayers and ritual offerings to ancestors at the sacred rock near the temple.
• Some also perform Pithrukarm on this day at the temple.
• Various cultural art forms of Kerala such as Ottanthullal and Kathakali, Kolkali (a tribal art form) are performed during the festival at Thirunelli temple.
Thirunelli Vishu Festival 2023 dates are 15th and 16th April 2023 and Thirunelli Vishu Festival 2024 falls on 14th and 15th April 2024. Wayanad in the North East part of Kerala is an important tourist destination in Kerala, known for its forest reserve, wild life, and spice gardens, along with ancient temples and monuments. A tour to Wayanad during Thirunelli Temple Vishu Festival is indeed an unforgettable experience for the tourists and devotees. Book your Thirunelli Vishu Festival tour now with the best inbound tour operator in India.