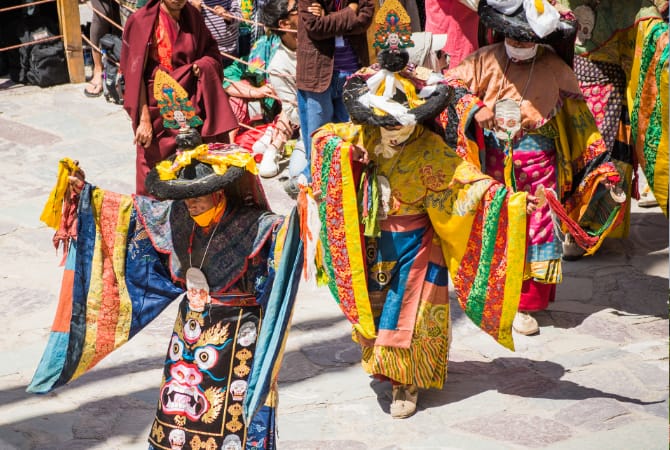 One of the best-known Buddhist festivals in India is Thiksey Gustor. Thiksey Gustor, is a 2-day festival, celebrated at Thiksey monastery located in Leh, Ladakh. Thiksey monastery is located just 20 km away from Leh. A wonderful tourist attraction, Thiksey Monastery is a must-visit spot in your Tour to Ladakh. This annual festival is celebrated on 18th and 19th of the ninth month of Tibetan lunar calendar, which usually falls in the month of October/November. Thiksey Gustor Festival 2023 dates are 31st October and 1st November 2023. The local people, the lamas and the monks wait eagerly for this festival. Ladakh being one of the most popular tourist destinations in the country, Thiksey Gustor Festival makes for an exciting festival tour in India. A tour to Leh Ladakh during Thiksey Gustor is a must to explore this beautiful region and experience the Tibetan monks’ lifestyle, traditions and rituals.

Thiksey Monastery is one of the beautiful Buddhist monasteries in Ladakh. It is one of the most visited monasteries in the region. It’s at a spectacular location, atop a hill, amidst the snow-capped mountains with scenic surroundings, and is just a little distance away from Leh. In fact, Thiksey Monsatery is also referred as “Mini Potala”, taken after the Potala Palace of His Highness the Dalai Lama in Tibet.
Thiksey Gustar is celebrated in a grand way at the monastery. Gustar means sacrificing and the Thiksey Gustor Festival is to celebrate the victory of good over evil, the cultural life of Ladakh, and to commemorate Tibetan Buddhism principles and rituals followed by the monks in the region. The monks here follow the Gelugpa order founded by Je Tsongkhapa in the 15th century CE. The festival pays tribute to the Gelugpa sect of Tibetan Buddhism

Some of the highlights of the festival are:

• Thiksey Gustor Festival begins with a special morning prayer. The monks recite the Buddhist sutras in a synchronised manner. This creates a soothing effect on the listeners. That is followed by other elaborate Tibetan Buddhist ceremonies.

• The central theme of the celebrations is the Black Hat dance (Shanak Cham). Cham dance is the sacred dance performed by the monks and the locals, wearing decorative costumes and heavy masks representing varied religious characters. The sacred dance is a dance drama where the depiction of triumph of evil over good is beautifully displayed. This is one of the major highlights of the Thiksey Gustar festival. Tourists enjoy this performance, along with the locals.

• Another program that people eagerly look forward to during the festival is the re-enactment of the killing of the traitor King Lang Darma of Tibet by a Buddhist monk during the mid 9th century.

• On the second, effigy representing evil or the devil or the demon is burnt. The effigy, referred as dho, is also burnt to prevent any kind of misfortunes, wars, physical disasters and epidemics in the world. The ceremony is called Dao-Tulva. The burnt effigy pieces which remain after the ceremony are then thrown away in four directions which particularly signifies the removal of the enemies from the entire land.

• After the festival is over, the sacrificial cake, also known as the Torma, is distributed. This ceremony is called Argham or ‘klling. The main performer of the Black Hat dancer group does this distribution, marking the end of the festival.
Visiting Ladakh is definitely a once-in-a-lifetime experience, and many people from India and around the world visit this picturesque destination just to take part and witness the Thiksey Gustor festival in Leh, Ladakh. Make a plan to visit Thiksey Monastery in Ladakh for the Thiksey Gustor. The local people and the monks in the Thiksey monastery welcome the tourists with open arms, and everyone enjoys the festival to the maximum. Book Thiksey Gustor Festival, Ladakh Tour with the best inbound tour operator in India for an exciting and a memorable journey.