The Sangai festival of Manipur 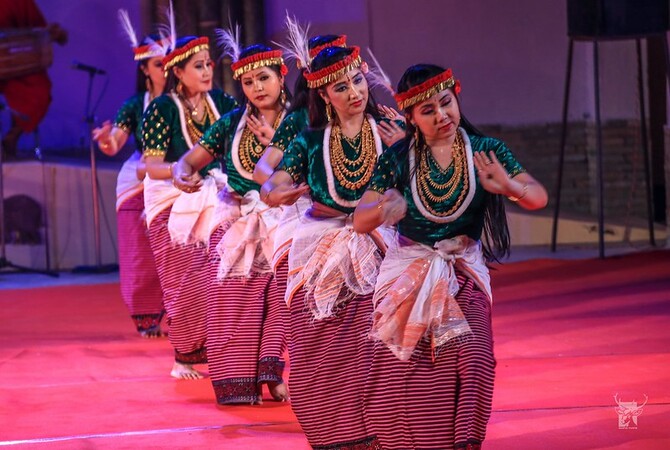 The Sangai festival of Manipur

Manipur Sangai Festival is one of the popular festivals in the state of Manipur. It is an annual festival dedicated to the State animal, Sangai, which belongs to the family of brow-antlered deer, found only in floating Keibul Lamjao National Park in Loktak Lake.Manipur. Manipur’s Sangai Festival is celebrated in the month of November. The first festival stared in 2010 on a small scale, limited to only the local people of Manipur. Soon, the celebrations became grander and in each passing year, it became bigger and bigger. Today, the Sangai festival of Manipur, has gained its popularity in the festival tours in India and attracts people from all across the country. Tourists from international locations also pay a visit to Manipur during the Sangai festival time. Sangai Festival 2023 dates are from 21st to 30th November 2023. The dates usually remain the same every year. The Sangai festival depicts the rich tradition and culture of the state to the outside world.
The Sangai festival of Manipur is organized by the state government and the state tourism department to promote Manipur’s tourism. It is the grandest festival of Manipur today and hundreds of tourists visit the place during the festival time. The festival is a means to show to the world the potential of the state in the field of Music, Arts & Culture, Handicrafts, Handloom, Indigenous Sports, Adventure sports, Cuisines etc.
The festival is organized in different locations in Manipur. In 2022, it took place in 13 districts of Manipur. The theme of the event is “Festival of Oneness” as it brings about a sense of belonging and the local Manipuri people are proud of their heritage, in spite of belonging to various tribes and caste.

Some of the major highlights of the Sangai Festival

• One of the major attractions in the Sangai Festival is the Raas Leela dance, the classical dance form of the state, and this Raas Leela is quite different from Raas Leela celebrations in other states of India.
• Other folk dance performances that the locals and the tourists look forward to are the Bamboo dance, Maibi dance, Kabui Naga dance, Khamba Thoibi dance, Lai Haraoba dance, etc. These are various dance forms, unique to the state of Manipur and performed by different tribes of the state. Hence, each dance is different from the other.
• An array of Manipur’s best indigenous handicrafts and handloom items is in display at the various stalls and exhibition grounds for the tourists.
• The festival ground has many themed huts, beautifully decorated and each hut represents a tribe of Manipur. The creativity and artistic skills of the people are clearly seen in these beautifully designed huts. The arts and crafts of Manipur are displayed in these huts, and people have a good time exploring these unique items, which are not easily available in the market.
• Indigenous sports, martial arts, adventure sports, in which prominent and budding players participate, are other enjoyable activities that people love to watch.
• The state also arranges a good number of adventure tourism activities that tourists love to take part. Trekking, white-water rafting, parasailing etc. are popular adventure sports that people enjoy during the Sangai festival.
• The festival is also a kind of food festival where all types of Manipuri delicacies are served at the food stalls. Every Manipuri food item, whether veg or non-veg has its own distinctive flavour and taste since it is prepared of natural and indigenous ingredients. The Sangai festival is, thus, a big-time delight for the foodies.
If you want to explore the State’s rich cultural heritage and the people’s passion for love and art, then a tour to Manipur during the Sangai festival is a must. It is a cultural extravaganza to showcase the uniqueness of the state. Book your Sangai Festival Manipur Tour with the best inbound tour operator in India, to explore the culture and traditions of this state in the North East India. The 10-day festival is a must if you want to witness the tribal life of the people. It has its own unique charm which every tourist enjoys.