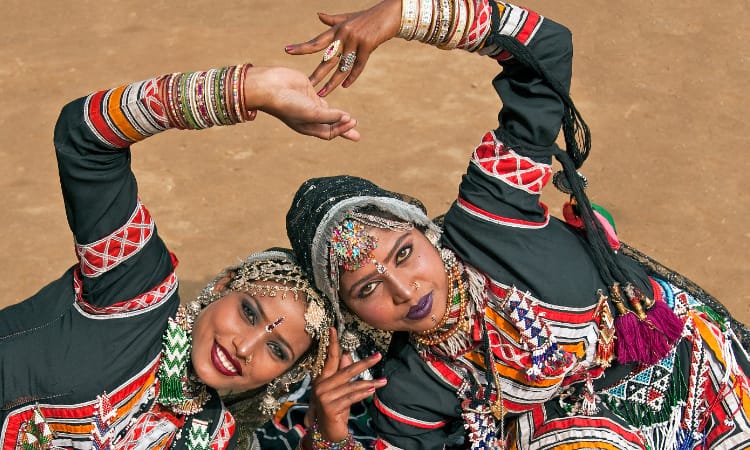 The festival of Teej is a beautiful festival for women, celebrated in many parts of India, but more widely and elaborately in Rajasthan. This is a festival to celebrate the beauty and abundance of Mother Nature and to evoke the blessings of Lord Shiva. A festival in which all rituals and customs are performed by the womenfolk, beautifully decked up for the occasion, and they pray to Lord Shiva for the health and welfare of their husband and family. Teej festival is celebrated in the states of Rajasthan, Uttar Pradesh, Uttrakhand, Madhya Pradesh, Chattishgarh, Gujrat and Andhra Pradesh. In India, it is known for as a celebration of fun and festivities by Hindu women along with rituals and traditions. Rajasthan’s Teej Festival is very popular. Rajasthan’s Hariyali Teej is so popular that many people prefer to make a tour to Rajasthan during the Teej festival time, when this colourful state of India becomes all the more gorgeous at the backdrop of the celebrations of this festival.
Hariyali Teej is celebrated on the third day of the Shukla Paksha in Shravan Mass, which usually falls in the month of July/August. Hariyali means greenery and the Teej festival is also a way to celebrate the advent of monsoon for a bountiful nature. Teej festival 2023 date is 19th 2023.

Significance and History of Teej Festival

Teej festival is for Hindu married women, who keep fast for the day and offer their prayers to Lord Shiva and Goddess Parvati so as to be blessed with a happy marital life. As per legends, Mata Parvati and Lord Shiva became life partners on this day. It was after 108 years of fasting by Parvati to show her love and devotion to Shiva, Parvati was accepted by Lord Shiva as his wife on this day. Another story says that Parvati was reborn 107 times and it was her 108th time, she was born as Parvati, and she was blessed to be the wife of Lord Shiva on this day. “Teej” as per Hindu scriptures is the name of an insect that comes out from the earth’s surface during the monsoon season time. So, Teej festival celebrates not only the union of love between Parvati and Shiva, but also celebrates Nature, its abundance, the birds, the flowers, the monsoons and the clouds.

Highlights of Teej Festival in Rajasthan

Rajasthan wore a festive look during the Teej Festival time. Preparations for the festival start a week before. Swinging is an essential part of the festival. Swings are hung on trees and beautifully decorated with fragrant flowers. All over Rajasthan, you will find decorative swings hung from tree. For tourists, it would seem like you are entering a place which has a beautiful fragrance all around.
• Women keep fast the entire day. They are beautifully dressed in their traditional attire and jewelleries. They visit the temples to offer prayers. Before sunset, they gather with friends and neighbours in the courtyards or gardens and engaged in fun activities like singing, dancing and swinging. Women sing beautiful Teej songs while enjoying their swing rides. They also do Ghoomar dance. In some places, artists are invited to sing Teej songs and dance Ghoomar Dance.
• Green is the colour of the season and most women wear green colour sarees or ghagra cholis, though anything bright in colour is preferred. Women beautify their hands with traditional Rajasthani mehndi designs.
• One of the major highlights of the Teez Festival in Rajasthan is the Teej Procession. A splendidly decorated idol of Goddess Parvati on a palanquin is carried through the various cities of Rajasthan. Jaipur celebrates this for 2 days which tourists and the locals look forward to enthusiastically. The antique handcrafted palanquin is carried by eight men in red colour traditional attire. Caparisoned elephants, camels, bullock carts pulling cannons, chariots, musical bands, and dance groups join the procession, including the women folk. This Teej cultural procession is a grand one and the locals and the tourists enjoy this to the core. Teej songs are sung. Folk artists and performers entice the crowd with their splendid performances when the procession moves further. Teej prasad is then distributed among the crowd.
• Teej Fairs and exhibitions are held where you will find a good display of the culture of Rajasthan. For tourists, this is an added bonanza, where they can shop for Handicrafts, traditional Rajasthani dresses and jewelleries.
Rajasthan, is thus, very popular for celebrating Teej Festival extravagantly and with full gusto and fervour. The Teej festival in Jaipur, Udaipur, Jodhpur and other major cities of Rajasthan, gains a lot of attraction from the people all over India. Infact, there are tourists from international destinations too. Plan your Tour to Rajasthan with the best inbound tour operator in India and enjoy a festival tour in India.