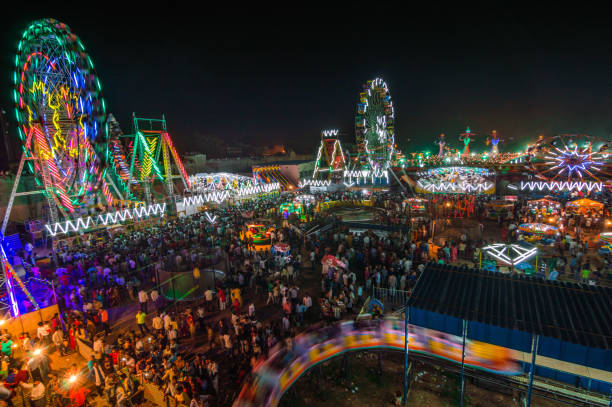 Tarnetar Fair has today become one of the most important festival tours of India as you can witness the ethnic and rural side of vibrant Gujarat. The little Tarnetar town comes to life during these three days of celebrations when the fair becomes an amalgamation of folk-dance, music, costumes, food, arts and culture. The festival is only gaining more and more popularity in each passing year and attracting tourists not only from India, but from abroad. Every year more than 50,000 people attend the festival.

Since the time immemorial, this fair has been held. As per legends, the origin of the fair trace back to the time of Draupadi’s Swayamvar, when Arjuna completed the task of piercing the eye of a fish rotating above with an arrow by looking at its reflection in a bowl of water below. He then married Draupadi by winning this task. It is believed that this fair was held to celebrate Draupadi’s swayamvar, which was almost 200 to 250 years ago.

The fair is held at the temple complex of Triniteshwar Mahadev. This temple is the main attraction point of the fair. The fair ground looks just beautiful with the temple at the centre and a river flowing by the side. Inside the temple, there are three kunds, Brahma, Shiva and Vishnu Kund and it is believed that a holy dip in these kunds or temple tanks is considered auspicious by the devotees. This holy dip is equivalent to taking a dip in the Ganga river.

Celebrations at the Tarnetar Fair

The major highlight of the fair is the promotion of the traditional music, dance, costumes and arts of Gujarat. Some highlights of the festival are as follows:

Tarnetar is a small village located 200 Km from Ahmedabad, Gujarat and there is easy connectivity to reach the place. The nearest airport is Rajkot, 75 km away. To have a unique experience and enjoy to the fullest the ethnic charm of Gujarat, Tarnetar Fair is worth visiting.