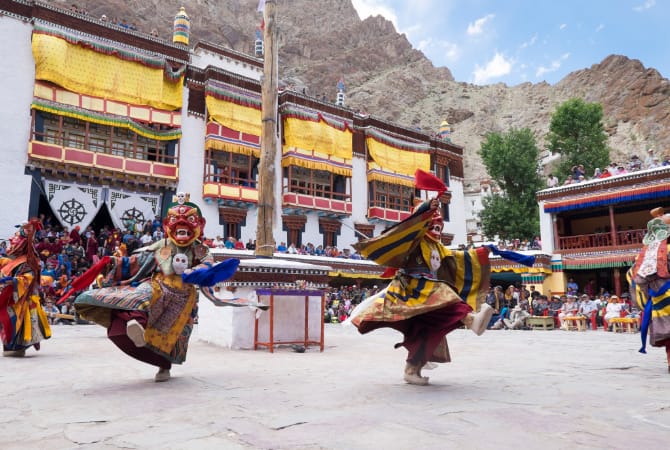 Tak-Thok Tse-Chu is a major Buddhist festival celebrated in Ladakh, one of the prime tourist destinations in India. This festival is one of the important festivals celebrated on a grand scale in Ladakh and it is a prime attraction for tourists and pilgrims in the region. It is celebrated on the 10-11th day of the Lunar Tibetan Calendar, which usually falls in the in the month of July or August every year. TakThok TseChu because of its great fervour and pomp, clubbed with spiritualism of Tibetan Buddhism, and of course the scenic beauty of the location, attract a large number of tourists from all across the country, including abroad.
Tak-Thok Tse-Chu is celebrated at Takthok monastery in Ladakh. Takthok Monastery is located about 55 Kms from Leh. The monastery has a traditional look and feel, built around a cave of 8th century, where it is believed that Guru Rinpoche stayed for his meditation. Takthok monastery or gompa is the only Nyingmapa monastery in Ladakh and it houses 60 monks. Nyingmapa is the oldest of the four major schools of Tibetan Buddhism. Takthok mean “rock roof” in local Ladakhi language. One of the attractive features of this monastery is that roof and walls of the gompa are made of rock. The entire monastery comes to live during the festival time. The Takthok Tsechu festival is held to commemorate Guru Rinpoche.Tak-Thok Tse-Chu 2023 dates are 28th and 29th July 2023. Book an exclusive Ladakh Tour 2023 during Tak-Thok Tse-Chu to have a glimpse of the cultural life of the Tibetan monks and the locals in Ladakh.

• One of the highlighting events in the Tak-Thok Tsechu Festival is the cham dance, performed by monks and the locals wearing elaborate masks and colourful costumes. The masks represent various religious characters and the Cham dance is a depiction of triumph of good over evil. The dance, also depicts the stories of compassionate deities which the Ladakhi people worship.
• Many tourists flock to the monastery, including the pilgrims and monks. It is said that whoever gets a chance to pay homage to Guru Rinpoche and other deities during the festival time are blessed and get protection from all evil forces.
• The locals visit the monastery to offer their prayers, wearing their best traditional dresses (Goncha) and jewelleries. Rituals are followed for 2 days by the monks and the local people.
• The ambience all around is a festive one and the monastery ground becomes a social gathering where people greet each other and have fun.
• People gather to witness the various folk dances, spiritual music and other cultural practices of Ladakh.
A tour to Ladakh during Tak-Thok Tse-Chu is a must in one’s life to get acquainted with the cultural life of the people of Ladakh. You can visit the monastery by road, after getting down at Leh or Jammu. The nearest airport is Kushok Bakula Rinpochey Airport, Leh and the nearest convenient railway station is Jammu. Leh is just 55 km away from the monastery. Leh-Ladakh Tour Package during Tak-Thok Tse-Chu festival gives you a good chance to explore this beautiful place. Make your travel plans to Leh during the festival time with the best travel operator in India and make your Tour to Ladakh a memorable one.