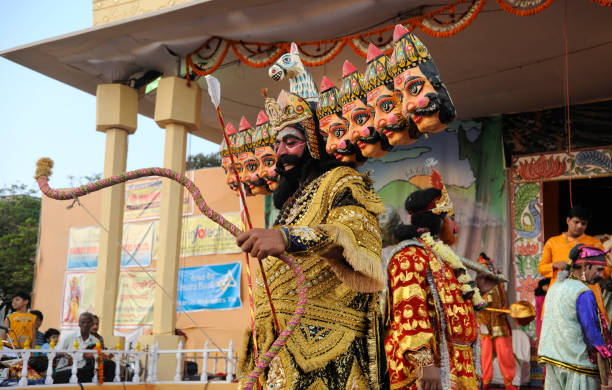 Ramlila, depicts the entire story of Ramayan’s Lord Rama in the form of plays for a period of 10 days and ends on the day of Dussehra. In most parts of India, Ramlila is celebrated on a grand scale, but Ramlila that takes place in Ramnagar, Varanasi deserves a special mention. Ramnagar Ramlila is one of the most awaited festivals in Varanasi, Uttar Pradesh. It usually takes places in the months of October or November, during the Navratri time. Visiting Varanasi during this time has its own unique charm. The historical set of plays that depict the entire Lord Ram’s journey as told in the Ramayana is something worth watching, a kind of lifetime experience for many. Ramnagar Ramlila is almost more than 200-year-old celebration, under the patronage of the Royal House of Benaras. Its popularity has spread far across the country, and in each year, the number of people attending it is increasing. Ramnagar Ramlila entices the locals as well as the tourists to visit this place during the festival time. Making a tour to Varanasi is worth taking to enjoy the rustic charm of Baneras along with the local people there. Over a lakh tourist throng to Uttar Pradesh to attend this annual festival. Ramnagar Ramlila 2023 dates are from 15th October to 24th October 2023 and Ramnagar Ramlila 2024 dates are from 3rd October to 12th October 2024.

Ramlila is a historical set of plays that show Lord Ram’s journey as told in Tulsi Das’ Ramayan – the story right from his birth, marriage, to exile to Sita’s kidnapping, and on the last day, the play culminates by showing the killing of Ravana by Lord Ram, thus depicting the end of evil by good.

Ramnagar Ramlila is organized at the Ramnagar Fort every year.  The history of this Leela dates back to 239 years old, when it was started by Kashi Naresh Udit Narayan Singh in 1783. Since then, Ramlila has been staged and is celebrated with great grandeur and royal magnificence.

Ramnagar Ramlila has rightfully been considered as an Intangible Cultural Heritage of Humanity by the United Nations. This has been acclaimed as a cultural phenomenon in the year 2008. Ramnagar Ramlila is supposed to be the oldest Ramlila in India.

Highlights of the Ramnagar Ramlila

The play is enacted for 4 hours each day in a 10 km area under the open sky on a wide stage, and each verse or chaupais is staged. There is no change in the pattern of this Ram Leela even in the modern times. The entire ambiance is a festive one with the traditions remaining intact. There are permanent and temporary structures, representing the various locations like Ayodhya, Janakpuri, Lanka, Ashok Vatika etc. Ramnagar Ramlila is popular for its lavish sets, dialogues, light, sound, backdrops, and the visual spectacle. The interesting part is that the devotees, the audience move along with the performers to the next location with every episode. Ramnagar turns into a moving stage, with its acts.

Each character in the play gets so involved to the skin of the character that they are called by the name they have been assigned in the play. Local male artists are auditioned for the play and it requires month long practices to enact the roles.  The play mesmerises the audience so much that they start showering flowers, they start praying to the characters once they appear on the stage. They shout in unison “Jai Shree Ram” when they get totally engrossed in the play. Audience feels the presence of Lord Ram in this Ram Leela.

Locals from all sections of society, including the tourists from other parts of India come together to have a glimpse of the tales of the Ramayana. Even foreigners visit this place to see Ramlila. Sadhus called Ramayanis come from different places and recite the Ramcharitmanas text. Some tourists carry a copy of the Ramacharit Manas and read stanza after stanza while the performers enact the play.

The last day of the play becomes even more exciting. It is the day of Dussehra, and lakhs of people visit Ramnagar to celebrate Dussehra, the victory of good over evil and the death of Ravan. The atmosphere is festive and cheerful. At the end of each episode, an aarti is performed, and audience chants “Har Har Mahadev”, “Jai Shree Ram” or “Bolo! Raja Ramchandra ki Jai!”. All these sounds echo in the air creating a spectacular event for the onlookers.

Varanasi is well connected from all parts of India by rail, road and air. The nearest Airport is Lal Bahadur Shastri Airport in Varanasi and Ramnagar is 40 Km away from the airport and easily connected by buses and private cabs. Ramnaga Ramlila is one of the country’s traditional Hindu ceremonies, which should be experienced by one and all in their lifetime. Book a tour to Varanasi, Uttar Pradesh, India for Ramnagar Ramlila. The best tour operators in India infact provide a guided tour for an exciting glimpse of this traditional play, where the guide explains every act and performance as you watch and walk between the stages.