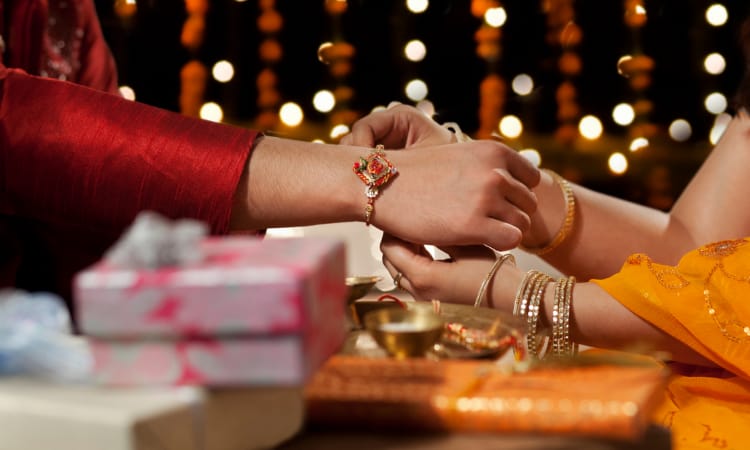 A celebration dedicated to siblings for love, care and protection, and this is what Raksha Bandhan is all about. In India, Rakshabandhan is celebrated in almost every Hindu household, especially in the Norther and Western Part of India. The bonding between brothers and sisters needs to be cherished for a lifetime and Raksha Bandhan is one such festival in India which is dedicated to only siblings’ love, respect and relationship. It also signifies a bond of relationships in families like as among cousins, sister and sister-in-law (Bhabhi), aunt (Bua) and nephew (Bhatija), and other such family relations.
Raksha Bandhan is celebrated on the full moon day of the Hindu month of Shravana which typically falls in the month of August. Raksha Bandhan 2023 date is 30th August 2023. The Hindu Festival of Rakhi or Raksha Bandhan is also celebrated by the Jains and the Sikhs and the Brahmins.
While for Hindus, it is a festival for brothers and sisters, in Jainism, Raksha Bandhan is celebrated to commemorate popular Jain monk Vishnu Kumar who was also the son of King of Hastinapur before he became the monk. Rakshabandhan as a festival is highly revered by the Jain community, and on this day, the Jain priests give ceremonial threads to the Jain devotees. For Sikhism, the festival is dedicated to the love and bond between brother and sister and is referred as “Rakhardi” or “Rakhari” by the Sikhs. It is celebrated in the same way as the Hindus, by tying thread around the wrist of the brother by the sister. For Brahmins, the day is considered important to change their sacred thread (Janeu/ Yagyopaveet).

The word Rakhshabandha is made up of two words, “Raksha”, which means protection and “Bandhan” which means to tie. So, the literal meaning of the word is the “tie or knot of protection”. There are many legends associated with Raksha Bandhan.
• It is believed that when Lord Indra was fighting a battle with the demons, he was finding it difficult to defeat powerful demon King Bali. The war continued for a long time and it was not ending. Seeing this, Lord Indra’s wife Sachi went to Lord Vishnu to ask for His help. Vishnu considered Sachi as his sister and gave her a holy thread and asked her to tie this on Indra’s wrist. Once the holy thread was tied, Indra defeated Bali and won the battle.
• As per another legend, when Lord Vishnu won the three worlds from the demon King Bali, he was asked to stay at Bali’s palace. Lord Vishnu and Maa Lakshmi started staying with Bali. But Maa Laxmi wanted to go back to her own place. So, she made the demon king her brother by tying a thread around his wrist and requested him to set her and her husband free from his vow, and return back to Vaikuntha. Bali agreed and Lord Vishnu returned to his place with Maa Laxmi.
• Historical scriptures also mention that Lord Ganesha created Maa Santoshi as a sister to his two sons, Shubh and Labh, on Raksha Bandhan day.
• Lord Krishna once cut his finger by mistake. Draupadi who was nearby tore off a bit of her sari and tied his finger to stop the bleeding. Krishna was so pleased that he promised to help her when necessary. Thus, Krishna played a major role in Mahabharat.

Rituals of the festival

The day is celebrated by brothers and sisters, either in their own homes if they stay together or visiting each other’s home. The married sisters usually come to her maternal home to meet her brother and sister-in-law. The brothers get special attention on this day. The whole event is filled with fun and festivities. It is that time of the year when family members meet and celebrate the occasion.
The ritual starts with by the sister by offering aarti to her brother. And then traditional tilak or vermilion powder is applied on the forehead of the brother, and then the sister ties the rakhi (colouful thread) around the wrist of her brother. If the brother is married, even the sister-in-law’s wrist is also tied with a rakhi. Sisters pray for the wellbeing of their brothers and protect them from any negative influences, while the brother promises to protect his sister from any harm under any circumstances.
One interesting event that makes Rakshan Bandhan more interesting is the gift exchange in return for the rakhi. This is the part of the ritual. Once the sister ties the Rakhi around the wrist of her brother, the brother in turn has to give her something in return, either in cash or in goods.
In today’ time, the right selection of gift becomes very important. Many brothers opt for Rakhsha Bandhan Tour Package for their sister as a Raksha Bandhan gift. You can choose the place that your sister likes or in her wish list, and plan her a surprise Rakshan Badhan festival tour. Your travel operator can guide you on this. The best inbound tour operator in India plans specialised Raksha Bandhan Tour Packages like as the mystical Goa beaches or the scenic hill stations in Himachal Pradesh, may be a Royal trip to Rajashthan or South India Backwaters tour. The choice is endless.
This gift is simply a token of love and affection and should not be valued in terms of money. It is just a tradition that is followed. The blessings bestowed by the brother is itself the biggest gift for the sisters. But, yes, if you want to make something extra special for your sister on Rakshabandhan, then a holiday package is worth a gift for endless memories.