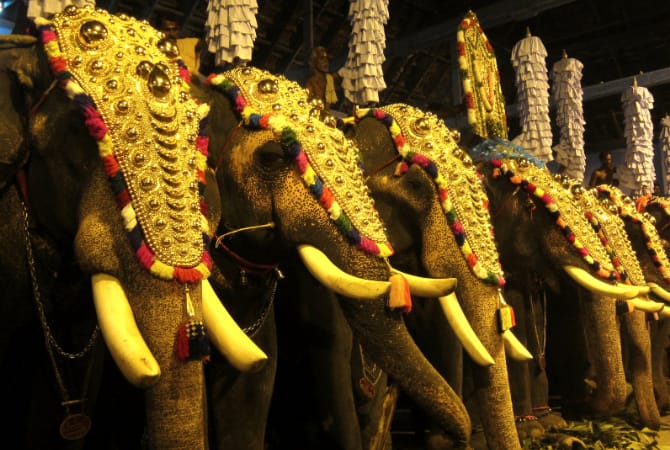 Nenmara Vallanghy Vela is basically a festival for the two villages – Nenmara and Vallangi. The day is celebrated to celebrate the birthday of the presiding deity of Nellikulangara Bhagavathy. Each of the villages have their own temples but for celebrations, the village people gather at the Nellikulangara Bhagavathy Temple. Locals say, this festival is a competition of the two villages, each village try to outdo each other which the locals and the tourists look forward to every year.
Both the villages are located in the midst of the Nelliyampathy forest. The architectural beauty of thee temples along with the beautifully decorated villages become all the more attractive for the occasion. The harvesting season is just over and the green paddy beautify the surroundings.

Some of the highlights of the festival are:

• The festival starts with a ceremonial procession of beautifully decked up caparisoned elephants, carrying idols of the deity. The elephants are taken out from both the villages, followed by the villagers, the priests of the temples and devotees with traditional devotional music played at the backdrop by local bands. This is called Panchavadyam, one of the best cultural art forms of Kerala.

• It is a sight to behold to this witness wonderful procession. The procession moves towards the temple from both sides, and once the procession reaches the temple complex, it seems that both the villages are waiting for a face-off, standing opposite to each other.

• A stage is erected which is called Utsavapandal. The villagers, the artists and musicians start performing various folk dances and songs, and show their skills. Each participant gives a tough competition to each other.

• Cultural Art forms of Kerala like Andivela, Karivela, Kummatti, Pandi Melam are performed which are worth witnessing, giving a depiction of the rich culture and heritage of Kerala. At the temple ground, special sheds are created to keep the elephants and this is called Anapandal. Made of bamboo and wood and decorated with lamps and lights, the Anapandal is another added attraction of the festival.

The extensive range of lights, decorations, fireworks, fun, festivities and display of various art forms definitely will make your Nenmara Vallangi Vela, Palakkad, Kerala tour a memorable one. So, book your Kerala tour during the festival time with the best inbound tour operator in India. Do not miss Nenmara Vallanghy Vela as this is one of the best festival tours in Kerala, India.