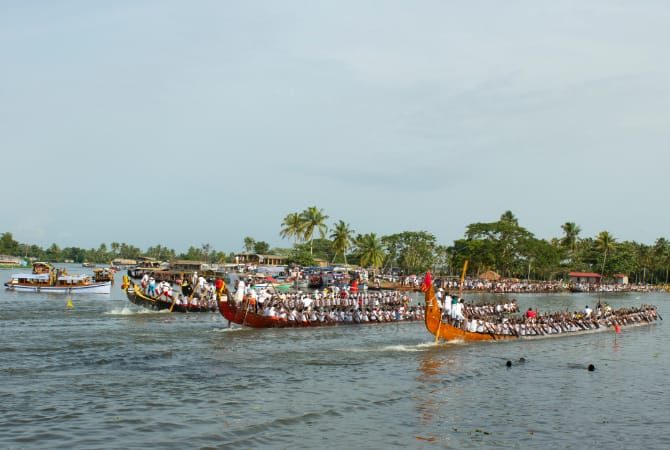 The Nehru Trophy Boat Race is one of the most widely acclaimed boat races in India where thousands of people from all across the country and abroad come to witness this premier boat race, which is also referred as “Olympics on water”. This is an annual festival, organized on the second Saturday in the month of August at Punnamada Lake in Alleppey, Kerala. Nehru Trophy Boat Race is one of the best festival tours in India. In 2022, the Nehru Trophy Boat Race was, however, held on Sept 4, 2022 on a grand scale after a gap of 2 years due to Covid Pandemic. The race is an open invitation for tourists from different parts of India and the world and is thronged by more than one-lakh tourists every year.
Preparations are on for 2023 Nehru Trophy Boat Race. Nehru Trophy Boat Race 2023 date will be on 12th August 2023 and for Nehru Trophy Boat Race 2024, the date is scheduled to be 10th August 2024. One of the prime reasons for the popularity of this boat race is that you get to witness a rare sight of snake boats passing through the flow of the backwaters in a synchronized manner, where the movement of the oars seem to be in rhythm and the entire scene can be visualized as snakes taking part in a race on water. The participants are from different villages of Kerala and they participate as a team to represent their village.

The first Nehru Trophy Boat race was held in 1952. In 1952, when first Prime Minister of India, Pandit Jawaharlal Nehru came to visit Alappuzha, he was delighted to see a boat race organized impromptu in honour of him. He was very delighted by the sight of the majestic snake boats (Chundan), rowing across the water logged Kuttanad. In that race of snake boats, Nadubhagam Chundan stood first. Panditji out of excitement jumped on Nadubhagam Chundan, and took a cheerful ride from Kottayam to Alappuzhah (Allepy). On his return to Delhi, he gave a silver trophy to the winning team. This trophy was in the shape of a snake boat placed on a wooden abacus, which was signed by Nehruji and on above the signature, the following lines were crafted “To the winners of the boat race which is a unique feature of community life in Travancore Cochin.” Ever since then, this boat race is conducted every year, and later on the it came to be known as Nehru Trophy Boat Race in fond memory of Panditiji.

The boat race on the Punnamda Lake is one of the most awaited events of the year for the people of Kerala. Preparations start weeks in advanced when the participating teams from varied villages of Kerala decorate their snake boats, referred as huge chundan valloms in local terminology. The snake boats are rubbed with sardine oil for smooth flowing through water The chundans are over 100 feet in length and each boat has a raised brow. There were coined as Snake boats by the colonial rulers because of their striking similarity with a native boat found in Norway. The track length is almost 1400 M with 4 tracks of 10 M. wide from East. Each team has more than 100 participants, each rower being an expert to row the boat in a synchronized manned. Men and women both participate in the race, and compete with each other. For the team who wins the race, it is a proud moment and a victory to be celebrated for months to come.

Alappuzhu comes to live on this day when the entire pavilion is exquisitely decorated and seating arrangements are made on the pavilion for the visitors to watch the race. The tourists can enjoy the race on their houseboats floating on the backwaters of Alappuzha. The houseboats are parked outside the tracks where one can watch the spectacular race.

It is a sight to cherish when you see hundreds of snake boats being rowed by the expert oarsmen in synchronization keeping the waters on their control but slicing through it, and reaching the shore on the other side. The whole event is an art form in itself. It seems as the tranquil Punnamda Lake comes to live as a sea of humanity, where you can get to hear the oars splashing in a rhythmic unison, with chanting of boat songs and beats of drums at the backdrop echoing all around, giving a more exhilarating experience to the entire event. The celebration of Nehru Trophy Boat Race also includes traditional music and folk-dance performances.

Book a tour to Alleppey, Kerala, India to witness Nehru Trophy Boat Race 2023. Kerala Houseboat Packages are highly demanded during this time. You can book an exclusive festival tour to Kerala with the best inbound tour operator in India and experience the exciting Nehru Trophy Boat Race, a spectacular race, filled with lots of enthusiasm and vibrancy.