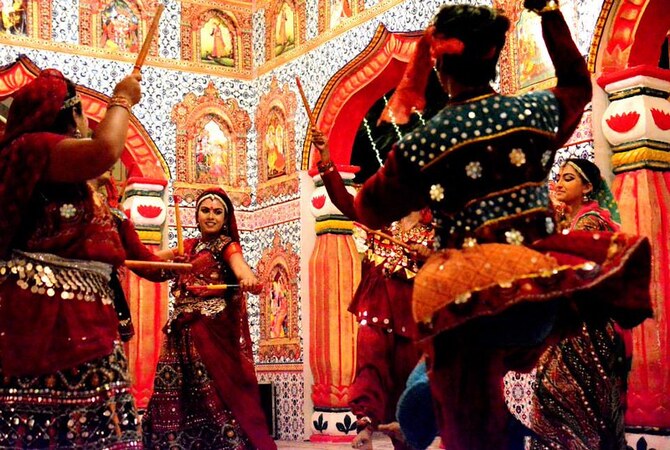 The rich cultural heritage of the vibrant state Gujarat makes it one of the most popular tourist destinations of India. The colourful state of Gujarat is known for its traditional festivals, out of which Navratri festival takes the top-most position in the popularity chart. Navratri festival is one of the most long-awaited festivals for the people of Gujarat. This annual festival is celebrated on a grand scale in various places of Gujarat. The entire state becomes a pallet of colour, fun, food, festivities, rituals and prayers during these 9 days of Navratri celebrations, dedicated to the 9 forms of Maa Shakti. Making a tour to Gujarat during the Navratri Festival time has its own unique charm.
People from all parts of India make a visit to Gujarat during this time to explore the state in a better way. Gujarat sees a huge number of foreign tourists as well during the Navratri Time. Some of the best places to visit in Gujarat during Navratri Festival are Gandhinagar, Vadodara, Ahmedabad, Surat, and Rajkot. The festival begins on the first day of the Hindu month Ashwin, which usually falls in the months of October or November.
Navratri Festival, Gujarat, India 2023 dates are from 15th to 23rd October 2023 and Navratri Festival, Gujarat, India 2024 dates are 3rd to 11th October 2024. Navratri Festival is also considered as one of the world’s longest and most celebrated dance festivals.

Navratri is celebrated for nine nights and dedicated to the worship of Maa Durga and her nine avatars – Navdurga. As per legends, Navratri depicts the victory of good over evil by killing of the demon Mahishasura. The belief is that Mahishasura was blessed with the gift of immortality by Lord Brahma, with the condition that he would be defeated only by a female. But, Mahishashur thought that no females can every overpower him and he started terrorising people on Earth for which even the Gods couldn’t stop him. As a result, Lord Brahma, Lord Vishnu and Lord Shiva combined their energies to a form of a Goddess, with all powers and weapons, whom they referred as Maa Durga and she would kill Mahishasura.
The battle between Maa Durga and Mahishasura continued for 9 days and nights and on the 10th day, Maa Durga beheaded him with her sword. These nine nights came to be known as Navratri, and the 10th day was referred as Vijaya Dashami, that signified the triumph of good over the evil.
The festival not only signifies victory of good over evil, but also celebrates soil fertility, and this is represented by grains sowed and grown on a mound of fresh soil.

Celebrations of Navratri Festival in Gujarat

There is no denying the fact the exploring Gujarat during the Navratri festival is definitely one of the most cherished trips that you can imagine. While Navratri is celebrated in whole of India with much enthusiasm, nothing can be compared to the Navratri Festival in Gujarat, where the entire state brings about 9 days of extreme fun and pleasure, along with the religious traditions. Different places in Gujarat are brought to life, which the people of Gujarat wait eagerly every year.

While the morning time is for offering prayers and worshipping the Goddess, the evening time is for fun and dance. Gujaratis come together to dance in unison during the festival in the most popular dance form, garba. Before starting the dance, an evening aarti is performed in which a tradition earthen pot with diyas called garbi is used and this represents prosperity. Once the arti is over, men and women put their best foot forward for the Garba dance. Seeing the crowd in their colourful traditional dress moving together in a synchronised circular movement is a sight not to be missed.
Besides the Garba Dance, there is Dandiya dance as well when people dance in co-ordination, again in circular motion, with sticks referred as dandiya sticks. The sounds of drums and sticks along with Garba songs at the backdrop echo all around.
The streets of all places in Gujarat wear a festive look for the nine long days. The decorative pandals with Maa Durga rhythmic mantras, garba and dandiya music, and crowded streets with locals and tourists in their best dresses are a sight that is not to be missed in Navratri Festival, Gujarat.

Some noteworthy places to visit for Navratri Festival Gujarat

Vadodara is the cultural capital of Gujarat and one of the most popular destinations in Gujarat for Navratri celebrations. In Ahmedabad and Surat too, you can experience extraordinary Navratri celebrations. Gandhinagar, the state’s capital is considered as a mecca for Navratri events. There are many designation spots in each of these cities for the 9-day celebration.
The United Way of Baroda is one such locations that welcomes around 30, 000 visitors every night for Garba and Dandiya festival. This one of the spectacular Navratri festivities in not only the state but all over the country. Gandhinagar has the Gandhinagar Cultural Forum Ground for the event. In Rajkot, the Race Course is a must-visit during Navratri. Bhadra Fort, Rajpath Club, GMDC Ground, Karnavati Club are popular locations in Ahmedabad for Garba events.
The temples like Khodiyar Mandir near Bhavnagar, Ashapura Mata-no-Madh in Kutch, and Chamunda Mata Mandir at Chotila on Ahmedabad-Rajkot National Highway are popular for their grand Navratri puja and celebrations.
The Navratri Celebrations at Somnath Mahadev Temple in Somnath is a heart-warming sight and should be a part of your itinerary in tour to Gujarat Navratri Festival. Along with dance, tourists and locals also enjoy authentic Gujarati food, and shopping Gujarat’s weaves and handicrafts.
Book Navratri Gujarat Tour 2023 with the best inbound tour-operator in India. Get Navratri Holiday Package Tour to Ahmedabad, Vadodara, Surat, Rajkot for an exciting and memorable Navratri Festival.