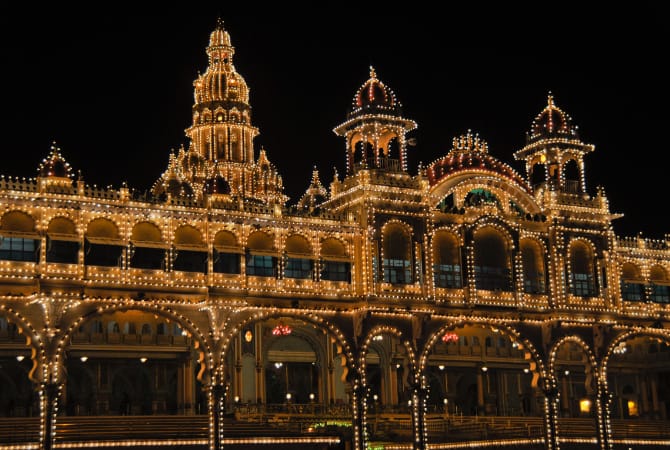 Dussehra or Vijayadashami, also known Dasara or Dashain, is one of the most popular Hindu festivals celebrated annually at the end of Navaratri. While Dussehra is celebrated all across India with great pomp and fervour, Karnataka’s Mysore Dasara deserves a special mention. Dasara is observed as Karanataka’s State festival – Nadahabba. Mysore Dasara is a 10-day long festival which is celebrated in a grand style and royal charm, depicting the triumph of good over evil. Mysore Dasara is a long-awaited festival for the people of Mysore. Due to its extravagant way of celebrating, this festival is also referred as the royal festival of Mysore. A tour to Mysore during the Dasara time is the best time to visit this place to explore the city in a better way. The whole city wore a festival look with fun, food, festivities, puja, traditions and celebrations going all around. Mysore Dasara 2023 dates are from 15th to 24th October 2023 and Mysore Dasara 2024 dates are from 3rd to 12th October 2024. You can book your travel package to Karnataka to celebrate Mysore Dasara 2023.

As per legend, Goddess Chamundeeswari or Maa Durga killed the demon Mahishasur on Vijayadashami day in Mysore. It is also believed that Mysore was named after slaying of buffalo-headed demon, Mahishasura. Dussehra or Dasara celebration has been an integral part of the culture and history of the state of Karnataka. It was started way back in the 1610 by Raja Wadiyar I. Ever since then, the festival is celebrated every year, and today it has become one of the most important festivals of the state, celebrated with great zest and zeal every year. Mysore Dasara is one of the most popular festival tours in India.

Where is Mysore Dasara Festival held?

The venue for the Dasara festival is the famous Mysore palace. Mysore Palace, also known as the Amba Vilas Palace, is a magnificent edifice situated in Mysore in Karnataka. The breathtakingly beautiful structure is the historical royal palace of the royal family of Mysore, built in the 14th century. Today it is one of the prime tourist attractions of Mysore.

The dasara celebration is for 10 days and is enjoyed by the locals and tourists from all parts of India and abroad with much zeal and great fervour.

Mysore Dasara is incomplete without mentioning the great parade, which is the most enthralling part of the festival.

Jumbo Safari: The first procession is called the Jumbo Savari, the traditional parade which starts from the ornately illuminated Mysore Palace. This procession sees a parade of camels, horses, elephants, including dance troupes, large bands, huge decorated floats, and armed forces. However, the main attraction is the parade of idol of Goddess Chamundeshwari atop an elephant with a golden seat. This idol is worshipped by the royal family before taken out for the procession to be worshipped by the public. The parade stops at the sacred grounds of Bannimantap Grounds in the evening of the 10th day or Vaijaydashami.

Torchlight Parade: The grand torchlight parade commences from the Bannimantap Grounds. Also referred as Panjina Kavayitha, this parade culminates the 10-day celebration of Mysore Dasara. The Torchlight Parade is nothing short of a carnival with laser display and spectacular fireworks, and it is a visual delight for the onlookers.

During Dasara, the entire city gets decorated and illuminated. Mysore Palace is the focal point of attraction as the entire palace gets a mesmerising look with more than one-lakh bulbs beautifying the palace from all sides. Other important buildings and streets are also illuminated. The illuminated Mysore Palace draws tourists from all over the world.

Bombe Habba is another highlight of the Dasara festival in Mysuru. Also known as or Dasarsa Doll, here the dolls are displayed as per an age-old tradition and arranged on odd steps of a platform (7, 9, 11).  These steps represent the nine days of Dussehra.

Cultural programmes by famous artists are arranged in the Palace. There are other activities too that can be enjoyed by the tourists like as Sports, Wrestling, Cycling and Heritage tours, Poet’s meet, Yoga, Food Festival, Film Festival etc.

The festival also opens up business avenues too when Dasara Exhibition is arranged in the Doddakere Maidana, by the Karnataka Exhibition Authority. Here leading business establishments, state government departments, the public and private sector industries set up their stalls to promote their products and services.

Another popular aspect of the Mysore Dasara is the exhibition that is held on the grounds opposite the Mysore Palace. This exhibition has various stalls displaying a plethora of items right from handicrafts to textiles, from home décor to kitchen accessories, from artefacts to clothes and jewelleries, which the visitors love to shop. The exhibition grounds have many gaming and entertainment rides for the young and the old.

Mysore Palace provides free entry for the visitors during the Dasara festival. But for few special events, like as the Jumbo Safari or the torchlight brigade, tickets are required. Visitors or tourists can purchase the VIP Gold Card which allow them to enjoy not only the popular “The Torchlight Parade” but also various special offers and discounts.