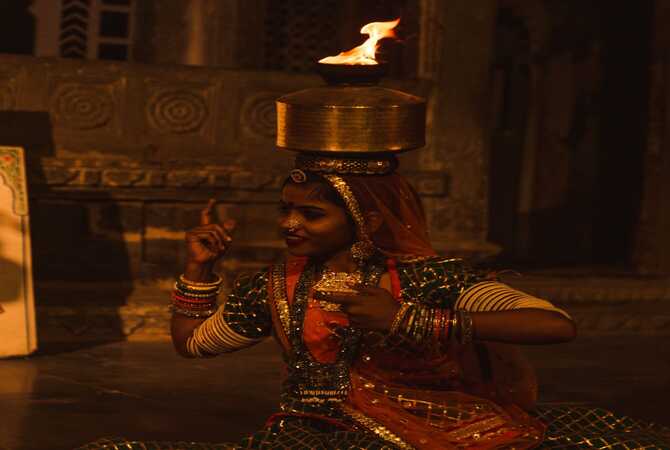 Mewar Festival, is one of the most colourful traditional festivals celebrated on a grand scale in the beautiful city Udaipur in the state of Rajasthan. The Mewar Festival is a spring festival, an annual festival to celebrate the advent of Spring and an essential part of the ancient traditions, culture and rituals of Rajasthan. The Mewar festival gives a colourful look to the entire city of Udaipur. The whole city is beautifully decked up giving a gorgeous and festive look, and people look forward to this festival eagerly every year. The Mewar Festival today entices people from all over India, as well as abroad. Tourists wait enthusiastically to take part in this festival. A tour to Udaipur, Rajasthan during the festival time is all the more alluring as you can explore the beauty, traditions and culture of the region in a better way. Mewar Festival is one of the best festival tours in India today. It is considered as the second World living Heritage festival of India.

The Mewar Festival origin dates back to the time of the Sisodia dynasty in India. According to history, Maharana Udai Singh once met a religious man while going out for his regular hunting. The holy man was meditating atop a hill, from which you get a good glimpse of the famous Pichola lake. The holy man blessed Maharana Udai Singh and advised him to build a palace at his place of meditation. The king agreed and built the famous Udaipur palace, and thus, founded the Udaipur city. This led to the celebration of the Mewar Festival in the city every year. Ever since then, the Mewar festival is celebrated on a grand scale to promote the beauty and culture of the city of Udaipur. And since it takes place in the months of March/April, locals also celebrate the festival to welcome the Spring.

The Mewar festival brings to live the entire city of Udaipur. The forts, palaces, lakes, monuments, including buildings, shops and streets – everything gets beautifully decked up with lights, and lamps, flowers and other decorations. As the date of the Mewar festival in Udaipur draws near, everyone gets ready to welcome the festival with great enthusiasm.
The 3-day festival is celebrated with great gusto. Tourists from other parts of India and abroad start pouring in. There is hustle bustle in the entire city. Everything around looks colourful and bright. The locals are in their best traditional dress. People are happy. A spectacular ambience of fun, festivities is created in the Mewar festival.
When you make a tour to Udaipur during the Mewar Festival, you will experience the real beauty of the place, along with its old rituals and traditions of the Rajputana.
The celebration of the Mewar Festival includes a number of practices and rituals which are followed by the locals with great dedication and devotion.

The festival coincides with the Gangaur festival, which is a significant festival for the womenfolk of Rajasthan. Rajasthani women are dressed in their finest traditional clothes and join the celebrations.First, the images of Gangaur (Goddess Parvati) and Isar (Lord Shiva) are decorated. The image is that of a traditional Rajasthani couple handcrafted of wood, beautifully painted and decorated with clothes, jewelleries and accessories.
Womenfolk offer prayers to the images of Isar and Gangaur. Married women pray for marital bliss and good health of their husband while the unmarried ones pray for an ideal life partner.
The traditional sweet Ghevar is offered as an offering to the deities which gets distributed as Prasad.
Then these images are carry in a traditional procession which pass through different areas of the Udaipur city and at the end, move towards the Gangaur Ghat at Pichola Lake. Here, the images are transported into special decorative, boats and then immersed in the deep waters of the lake.

This is the ritual carried by the women and once the religious rituals are offer, the people gets engaged in the cultural celebrations.
The Mewar Festival celebrations include a good number cultural events and activities which both the locals and the tourists enjoy to the core. Folk dances, songs, music, and other cultural programs are performed, which show the cultural aspects of the state. Of course, you cannot miss out the colourful presentation of food delicacies in Mewar style.At the end of the third day, there is a magnificent display of fireworks, which ends the Mewar Festival. It is a sight to behold when the night sky is lit up with glittering fireworks.
What’s unique about the Mewar Festival, Udaipur, Rajasthan is the legacy that is associated with it. The ceremonies and the rituals were something that were performed by the family members of the Royal House of Mewar. Now, the same traditions have been passed over from one generation to another to keep the cultural integrity of the region intact. The only difference in today’s time is that it is performed in a much grander way, to make the festival full of life.

Udaipur is one of the most popular tourist destinations of Rajasthan and India as a whole. It is well connected by road, rail and airway. Maharana Pratap Airport or Dabok Airport in Udaipur is well connected with all major cities of India. State owned and private buses and cabs regularly ply on the route. The rail network is also good. Most tourists opt for a luxurious travel offered by Palace on Wheels and Maharaja’s express trains.
A trip to Uadipur during the Mewar Festival is worth a visit. Book your Mewar Festival Tour to Rajasthan now and explore Udaipur in its best form. Best In bound Tour Operator in India offers various tour packages to make your tour to Udaipur, Rajasthan a memorable one during the Mewar Festival. The Mewar Festival is one of the best tourist festivals in India to experience the rustic charm of the Rajasthani culture.