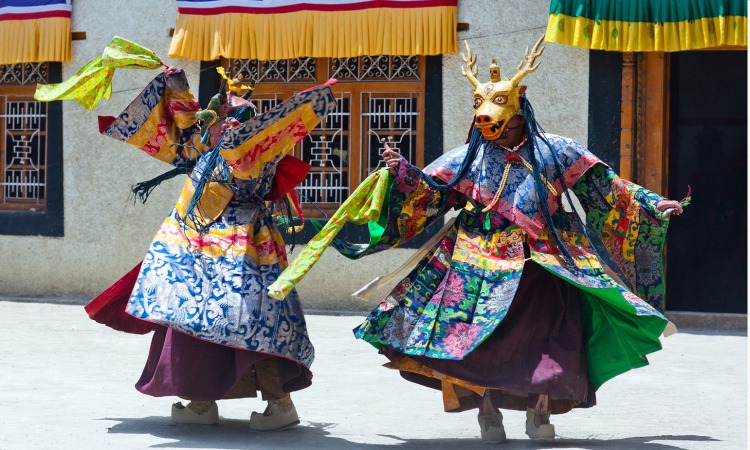 The Tibetan New Year in the month of February is celebrated as Losar Festival in Sikkim. An annual festival celebrated with great zeal and enthusiasm by the people of Sikkim, the Losar Festival in today’s time has become one of the best Festival Tours in India. Tourists from all parts of India, including other countries, make a tour plan to Sikkim during the Losar Festival time as it gives them a chance to explore the cultural heritage of the state in a better way.

Sikkim is one of the highly demanded tours & travel destinations in India. A beautiful state, abound with spectacular landscapes, flora and fauna, a trip to Sikkim during the Losar Festival has its added charm. It is a week-long celebration to celebrate the new year as per the Buddhist calendar. Losar Festival Dates 2023 will be from 21st February 2023 to 27th February 2023.

History of the Festival

The origin of the Losar festival is associated with the arrival of Buddhism in Tibet and its neighbouring countries like India, Bhutan and Nepal. Previously, it was celebrated as a winter festival where the locals used to burn incense sticks to attain the blessings of their deities and to get rid of negative spirits. Later on, the festival marked the end of the winter season as well as the harvest festival, and thus became a way of welcoming the New year and warm days ahead.

Significance of Losar Festival Sikkim
Losar festival coincides with the end to the harvesting season like in other parts of India. Farmers enjoy the fruits of their hard labour and patience. It is, thus, celebrated as a New Year, where people of Sikkim pray for a prosperous and blessed year ahead, and at the same time, thank the Lord for a good harvest.

• Gutar Chaam: The celebrations start 2 days before the actual day. The locals visit the Rumtek monastery or Phudong monastery. They chant prayers. Tibetan monks perform the Gutor Chaam, a kind of dance form, depicting the war between good and evil and the destruction of evil. The performers, who are usually the monks of the Tibetan Buddhism order, wear elaborate masks and attractive costumes and represent various characters like bad, good, devil and the divine. Various traditional musical instruments are played at the background. The Gutor Chaam dance is a treat to the eyes and it is believed is that it brings good luck to the viewers. Hence, the locals never miss Gutar Chaam, which is an essential part of the Losar Festival celebrations.

• Rituals: Losar Festival is also referred as Gyalpo Lossar. Visiting the monastery is a ritual that all locals follow in Sikkim. People take bath early in the morning, wear new clothes, go to monastery to offer their prayers, and visit friends, relatives and elders in the family. Offering buckets of Tsampa (a mixture of roasted barley flour and butter) on home altars is another ritual followed by the locals. They pray for a good harvest with this offering. Losar is one of the most favourite traditional festivals in Sikkim.

• Flowers: Fresh flowers are an essential part of the celebrations of the Losar Festival. Devotees when they visit the monastery, they carry with them fresh flowers to greet each other.

• Cultural programs: Like all other festivals in India, even the Losar Festival in Sikkim is celebrated with cultural extravaganza that everyone looks forward to. Houses, streets, markets, monasteries are decorated with lights, candles, flowers and the whole of Sikkim looks all the more beautiful. Yak dances are performed by local artists and youngsters on the street. From traditional delicacies to folk dance and local music, the whole ambience is purely enigmatic and locals and tourists delve into the high-spirited Sikkimese culture.

Don’t miss out the tourist attractions in Sikkim

During the Losar Festival, Sikkim comes alive with grand rituals and ceremonies. It is a much-awaited festival by the locals as well as travel enthusiasts. A visit to Sikkim during the festival time gives an added advantage to tourists to get a closer acquaintance with the colourful culture and traditions of this beautiful state of North East India. They not only enjoy the festival but also visit all nearby tourist attractions of the state like as the breathtakingly beautiful landscapes, shimmering waterfalls, the tall alpine forests, and the magnificent Kanchenjunga Peak, including the various monasteries.
Plan a Sikkim tour with the best travel operator in India during the Losar Festival. Book your tickets and accommodation well in advance for the Losar Festival Sikkim 2023. The nearest airport to Sikkim is the Bagdogra airport in Darjeeling. The nearest railway station is in New Jalpaiguri. Both the airport and the railway station are well connected with the other metro cities. From the airport or from the station, it takes 6-7 hours (approx.) to reach Sikkim by cab or bus which is easily available. Immerse yourself in the unsurpassed festive spirit of Losar in Sikkim.