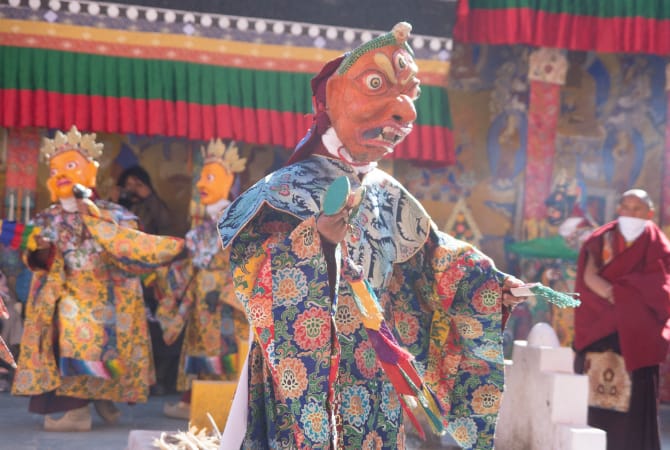 Ladakhi Losar is the new year celebrated with great pomp and fervour by the people of Ladakh. This is one of the most-awaited festivals in Ladakh, which entice people from other parts of India and globally as well. Ladakh is one of the popular tourist destinations in India, known for its picturesque landscape and is one among the most spectacular section of the Indian Himalayas. Tour of Ladakh is a must in one’s lifetime if you want to explore a nature’s paradise. The Ladakhi New Year is one of the best times to visit Ladakh to witness the true essence of Tibetan Buddhist culture, its traditions, rituals and its beauty. Ladakhi Losar is celebrated on the 10th month of the Tibetan Calendar for 15 days. This usually falls in the month of December. Ladakhi Losar 2023 dates are from 13th to 28th December 2023. Visiting Ladakh during the new year gives you a fulfilling experience – a journey and a stay in the lap of nature, fun and festivities – that can be cherished all throughout your life.

Major Highlights of the Festival

Losar in Tibetan language means New Year. The Ladakhi people waits for this festival with great enthusiasm every year, to welcome the year with great hopes and aspirations, and to pray for a prosperous and happy new year.

• The entire region comes to life on these 15 days of celebrations. The temples, the shrines, the monasteries, the stupas, the shops and the streets and the residential homes are all beautifully decorated. There is an ambience of festivities all around. The entire Buddhist community in Ladakh celebrates the festival with symbolic festivities, with great gusto and fun.

• Offering rituals to presiding deities is considered very auspicious on the new year. The festival starts by offering prayers to the presiding deities in the monasteries. These are the three jewels – Buddha, Dharma, Sangha – which the people of Ladakh and the Tibetan monks pay their homage.

• People wear new clothes and visit and greet each other. People visit the different monasteries, temples and shrines all across Ladakh, starting from the first day of the new year. Though Losar is a celebration for 15 days, the first three days are considered the most important for people to offer prayers and to greet each other.

• The eve of Losar festival is also celebrated when the people offer memorial food for the departed loved ones.

• Another noteworthy event on the eve of the new year is the procession called Metho, carried out by the locals and the monks through the streets and lanes. People chant sacred slogans and carry lighted torches. There is a belief that the chants and the flaming fires will get rid of all the evil spirits.

• Folk dances and songs are performed by the local artists and the monks in the evening at the monastery grounds and other places. There are hundreds of people gathering at the sacred places. Tourists also have great time during the festivities and follow what the locals do.

• Tourists also enjoy the various delicious Ladakhi delicacies and the plethora of local handicrafts and looms of the region which they take back home as souvenirs and gifts.

Book for an exclusive Tour to Ladakh to enjoy the Ladakhi Losar festival. If you are planning a tour to Ladakh, India, then visiting during the New Year time gives you a better chance to explore the region’s rich culture and heritage. Attending the Ladakh Losar Festival is indeed an out-of-the-world-experience. Check for Best Selling Ladakh Tour Packages with the best inbound tour operator in India, and enjoy this unique festival for a lifetime experience and endless memories.