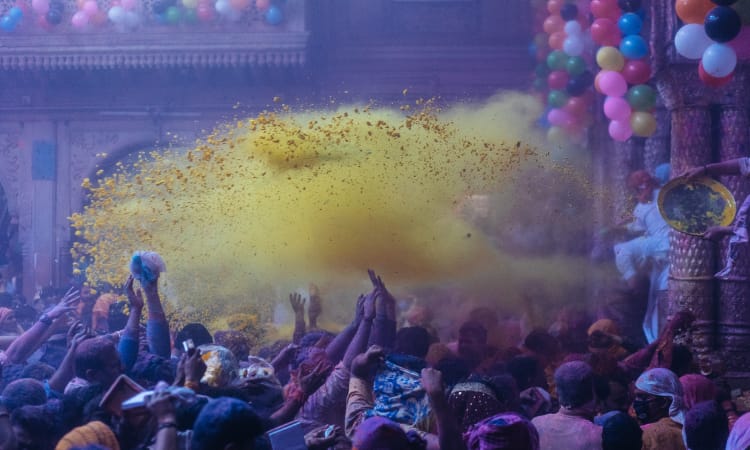 In Hinduism, the month of Bhadrapada is of great relevance because it is the birth month of Lord Krishna. Lord Krishna is the all-powerful Supreme Being in Hindu religion and the eighth incarnation of Lord Vishnu. Krishna Janmasthami or Gokulashthami is one of the most important religious festivals of India. Janmasthami is celebrated to commemorate Krishna’s birthday. Krishna Janmasthami is one such religious festival in India, which the Hindu devotees from all across the country look forward to every year with great enthusiasm. It is celebrated with great pomp and fervour all over India but there are two places which deserve a special mention for grand Krishna Janmasthami celebrations: Janmasthami in Mathura and Vrindavan. If one has to see the actual celebrations of Janmashtami, one should visit Mathura and Vrindavan during this time.
Janmashtami is a term formed out of two words: Janma (birth) and Ashtami (eight). Lord Shri Krishna was born in Rohini Nakshatra on the Ashtami Tithi (eighth day) of Krishna Paksha (dark fortnight) of Bhadrapada month. This usually falls in the month of August or September. Janmasthami 2023 date is 7th September 2023 and Janmasthami 2024 date is 26th August 2024. For an exclusive janmasthami celebrations and to witness the extravagant way of celebrating Lord Krishna’s birthday, a visit to Mathura-Vrindavan is a must in your lifetime. You can book a specialized Janmasthami Mathura Vrindavan Tour Package. In fact, with Krishna’s influence all over the world, and the mushrooming growth of Ishkon temples globally, Janmasthami festival in Mathura Vrindavan attracts tourists and devotees not only from India but also from foreign countries. Infact, Janmasthami Festival Tour to Mathura Vrindavan has become one of the best festival tours in India.

Mathura Vrindavan are the two places which are popular worldwide for Janmashtami celebrations. All Krishna temples in these two places are beautifully decorated with lights, diyas, lamps and flowers. The two places look all different – all gorgeous and mesmerizingly beautiful with festivities all around along with religious traditions.
As per religious scriptures, Mathura is the place where Lord Krishna was born and Vrindavan is the place where Lord Krishna spent his childhood. So, both the places held a great religious significance for people all around the world. The celebrations that take place in these two places are unique and thousands of devotees and tourists gather to see the rituals and events. Most devotees and tourists spend the day in Vrindavan enjoying the celebrations and go to Mathura in the evening to commemorate lord Krishna’s birth.

Mathura has around 400 and Vrindavan has more than 5000 temples dedicated to Shri Krishna and you will see each of these beautifully decorated for the occasion. Even the streets, shops and houses wore a festive look. Some of the best-known temples to witness Janmasthami celebrations in Mathura and Vrindavan are as follows:
• Shri Krishna Janmasthan Temple in Mathura (the temple is built around the prison cell in which Lord Krishna was born)
• Dwarkadhish temple in Mathur, known throughout the world for its intricate architecture and paintings
• Radha Vallabh Mandir in Vrindavan
• Vishram Ghat in Mathura, where Lord Krishna rested after killing the evil demon, Kansa
• Shri Banke Bihari Mandir in Vrindavan
• ISHKON in Vrindavan
• Sri Ranganatha Temple in Vrindavan
• Sri Sri Radha Gokulnanda Temple in Vrindavan etc.

What makes Mathura and Vrindavan special for Krishna Janamashtmi?

Rituals and customs that make Mathura and Vrindavan special places for Janmasthami Celebrations are as follows:
• The hymns sung in praise of Lord Krishna give a goosebump to the onlookers. It soothes your souls when you get to hear hundreds of devotees singing in rhyme these hymns. The whole night, everyone remains awake as Lord Krishna is believed to born at midnight and they spent the night listening to these melodious songs and bhajans. In every temple, this is one of the rituals followed the whole day and night.
• Taking dip in the Yamuna River is another ritual that people follow on this day. It is considered to be auspicious.
• One of the major highlights of Janmashtami celebration is the elaborate Abhishek or holy bath of Lord Krishna. The idols of Krishna are given baths using curd and milk and then rinsed with pure water. After that, the idols are beautifully dressed with silk attractive costumes and jewelleries. All temples wear a gorgeous look with these beautiful attractive idols of Radha Krishna.
• The small sized baby Krishna idols are also given the holy bath and beautifully decked up. Then they are placed on decked up cradles. Devotees rock the cradle, so as to rock baby Krishna on the cradle. Priests read Bhagavad Gita during this time.
• People wait till late night to have a glimpse of the dance performance, named as Raas Leela, which is basically an enactment of Lord Krishna’s dance with his Radha and other gopis. Some visit Madhuban where Raas Leele is very famous. Madhuban near the Yamuna River is the place where it is believed that Lord Krishna performed rasleelas.
• Dahi Handi is another highlight of the Janmasthami festival in Mathura and Vrindavan. This creates great enthusiasm among the tourists and the locals. The people look forward to this event enthusiastically. In this ritual, a pot filled with curd is hanged at a height and a group of young men, one above the other, forms a pyramid, and a single man climbs up to the top and breaks the handi or the pot. Dahi Handi is not to be missed at all.
• Chappan Bhog is another important ritual that the devotees follow. A plate with 56 different delicacies, including sweets and sweet dishes, is offered to Lord Krishna, while chanting prayers and mantras. Once the Bhog is presented to the lord, the same items are distributed as prasad to the devotees assembled at the temples that time. This is an important part of Janmasthami and you will be considered lucky if you get a chance to have a small portion of this Chappan Bhog.

The appeal of Krishna Janmashtami of Vrindavan and Mathura resemble no other places in which Janmasthami is celebrated. You will get to know the difference only when you visit the places during the time of the festival. So, next time, if you plan for a religious tour in India, then book for Mathura Vrindavan Religious Tour during Janmasthami Festival. Plan a vacation to Mathura & Vrindavan by booking a Mathura Vrindavan Tour package with the best inbound tour operator in India.