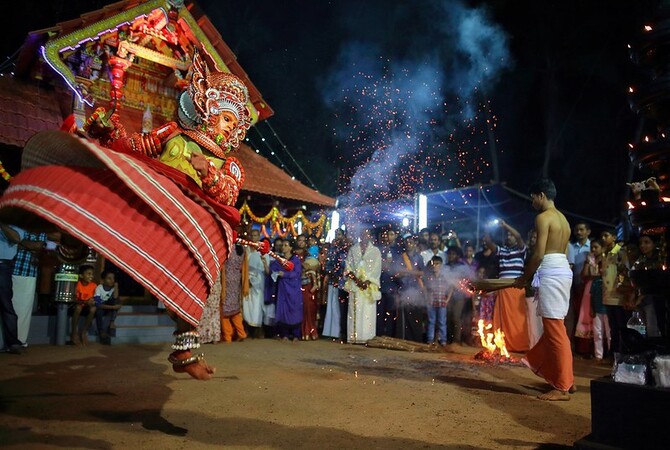 Theyyam is a popular ritual art form that originated in North Kerala. This is a folk-dance form that depicts the life stories of legends, Gods, demons, rulers of the state. There are various Theyyams celebrated in different regions in Kerala, and Kalliot Bhagavathy Temple Theyyam is one among them, which the locals of Kasargod and Kannur enjoy a lot. Kasargod was a part of Kannur district till 1984. Kannur and Kasargod are popular tourist destinations in Kerala. A visit to Kannur during the Theyyam time has its own unique charm of getting to explore the cultural life of Kerala in a much better way.

The entire temple complex and nearby areas look stunning. The fragrance of camphor, agarbatti, the lamps and diyas emitting lights from all sides, the musical beats – all these create an ambience of spirituality and festivities. Locals come to the temple to offer their prayers to the deity of the Kalliot Bhagavathy Temple and then eagerly wait for the events and performances.

Kalliot Bhagavathy Temple is the most awaited festival of Kasaragod and Kannur. The whole region comes to life and the people come together to celebrate this festival and exuberant festivity of tradition and folk art. Divine music, grand performances of Theyyam form, and a whole range of vibrant and exclusive rituals are conducted
Kalliot Bhagavathy Temple Theyyam is indeed a lifetime experience where you witness a feast of dance, music, rituals that are an essential part of