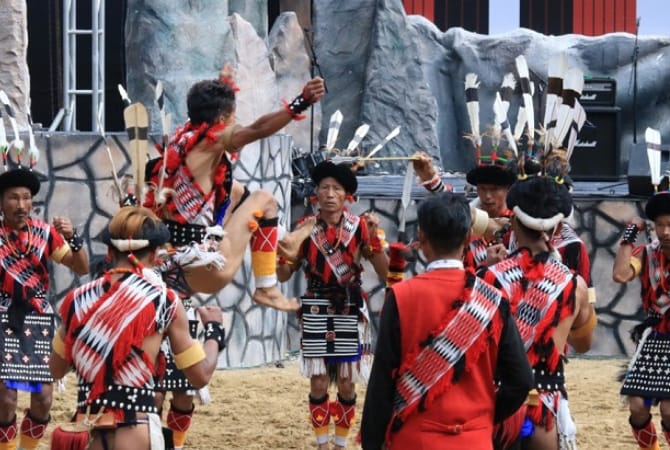 Where is Hornbill Festival Held?

Hornbill festival is celebrated in a small village called Kisama, which is about 10-12 kms from Kohima, the capital city of Nagaland. This is a heritage village in the state. Various tribal tribes of Nagas participated in the Hornbill Festival, which is also referred as the “festival of festivals”. You must definitely book a Hornbill Tribal Festival Tour 2023 to enjoy this ethnic festival.

Hornbill Tribal Festival 2023 dates are from 1st to 10th December 2023. In fact, the dates of this festival remain the same every year. It is always celebrated for 10 days, from 1st to 10th December annually. North East India is a haven for ethnicity, scenic beauty, food, culture, traditions and hospitality. The objective of the festival is to revive and protect the rich culture of the state and display to the outside world its extravaganza and traditions. If you are planning a North East tour, then Hornbill Festival Tour in winters is a must for travel freaks.
History
It was first started in the year 2000. The first event was organized by the state government. The objective was to promote the cultural heritage of the state and encourage inter-tribal harmony and communication. Initially, it was limited to only the tribals of the North East region. Slowly, the festival became bigger and bigger, and more and more people came to know about this festival. Gradually, the tribals of other parts of India joined in. In due course of time, the success of this festival made it popular for everyone in India and abroad. Today, Hornbill Festival is one of the most sought-after tourist destinations in India for all tourists, art and music lovers, environmentalists, foodies, and all travel freaks. Every year, Hornbill Festival has become more grander and elaborate. Hornbill festival tour has become one of the most popular North East Tours. It is open for everyone, far across the globe and the nation.

For tourists and visitors, the Hornbill Festival brings them closer to the ethnic and diverse culture of Nagaland and understand the tribal culture of India. It is an out-of-the-world experience to get acquainted with the tribal people and tribal culture. Some of the major highlights of Hornbill Festival are as follows:
Plethora of ethnic tribal display: On the festival ground, you will find different stalls displaying and selling local handicrafts, textiles, handlooms, jewelleries, home décor, utensils made by the indigenous tribe. There are stalls displaying wide varieties of traditional instruments like drums, gongs, wooden carvings, sculptures made by modern Naga artists. Each Naga tribe showcases their distinct culture, ethnicity, heritage and their inherent skills at the Hornbill festival. The local people look beautiful in their tribal traditional costumes which make the festival look all the more ethnic and traditional.
Traditional Naga Morung: One of the major attractions of the Festival is the exhibitions of the Traditional Naga Morung, which is an excellent sample of vernacular architecture. You will be delighted to see the various tribal huts, dated back to primeval lifestyles, being built on the vast expanse of the fair ground.
Ethnic food delicacies: A wide delectable array of Naga foods is available. All kinds of Naga traditional food as well as other varieties of food are available. In fact, most tourists also enjoy to see cooking process right in front of their eyes during the festival.
Competitions and cultural programs: Various competitions and contests are organized for the locals and the tourist. Some popular mentions include Naga chilly eating, pork eating, traditional games and sports, pony cart racing, horse-racing, and other customary competitions. There are events like beauty competitions and fashion shows, Naga wrestling, traditional archery, horseback riding as well. Cultural programs like folk dance, music, songs are organized to entertain the crowd.
Hornbill Festival Rock show: The most important highlight of Hornbill Festival is the Hornbill Rock Concert. Infact, it is this Rock show which has become more popular in the global world. Popular Music bands from across the country and even international bands perform. They also compete with each other. The musical rock festival enthrals the crowd to the core. Hornbill festival tour is incomplete without this rock concert.
Night market: Hornbill festival is basically a 24-hour celebration. It is celebrated for 10 days continuously. From morning till night, the whole Kisama village comes alive and stays vibrant. There is a spectacular Night Market that keeps you awake the entire night. Camping facility: Camping on the festival ground is recommended for the young crowd. Camping facility provides sleeping bags, tents, eco-toilets, drinking water, phone charging points, and a cooking space. Tourists have a wonderful time at the campsite with bonfire, jamming, and other activities.
The Hornbill Festival is one of the major tourist attractions in Nagaland and North East India. Book Hornbill Festival tour package with the best inbound tour operator in India. Hornbill festival tour provides an opportunity to experience the Naga way of life, right from food, music, songs, dances, to to crafts and looms, folklore and many more. Book your North East Tours and Hornbill Festival Tour 2023 for an excellent fun-filled holiday.