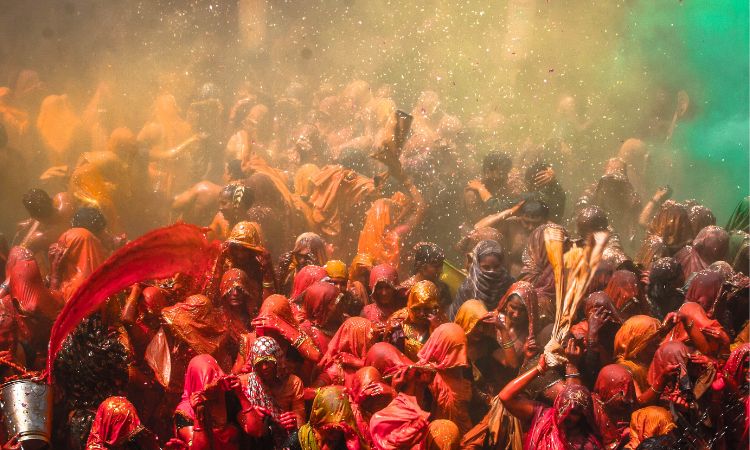 Holi festival is as one of the most popular traditional festivals of India celebrated in almost all parts of India on a full-moon day in the month of February/March (month of phalgun). Though it is predominantly a Hindu festival, yet in today’s time, it is celebrated by people of all caste and creed without any prejudice. This is one Indian festival which is celebrated with equal zeal and enthusiasm in various other Asian countries as well. There is a great vibrancy and positivity in this festival creating a colourful ambience all around. It is one of the most celebrated festivals of the country as it is being celebrated all over India. Making a Holi Festival Tour is worthwhile in one’s life.

Holi is known by various names – Festival of colours, Festival of Spring, Festival of Love, Rangwali Holi, Dhuleti, Dhulandi, Phagwah, Fakua etc. Holi is celebrated for 2 days. The first day is referred as Choti Holi or Holika Dahan, celebrated in the evening and the next day is the main Holi, celebrated for the entire day. Holi 2023 dates are 7th and 8th March 2023

There are many legends associated with Holi. One of the main significances behind the celebrations of the Holi Festival is the celebration of the victory of good over evil.

Holika Dahan: The first day of Holi is Holika Dahan. It is said that Holika, the sister of Demon King Hiranyakashyap was blessed by Brahma with a power that she won’t be harmed from fire or won’t be burnt in fire under any circumstances. When Prahlad, King Hiranyakashyap’s son became a true devotee of Lord Vishnu, this was not tolerated by Hiranyakashyap. So, he ordered Holika to burn Prahlad and let him die. Holika coaxed Prahlad to sit on her lap. While the fire was lit, Prahlad continued with his prayers to Lord Vishnu. Then Holika’s protective shawl covered Prahlad’s body and he was saved from the fire, while Holika died in the flames as a punishment for misusing her power. That is why, the first day Holika Dahan is celebrated by burning a pyle of fire so as to get rid of evil. Holika Dahan 2023 is on 7th March.

Legend of Prahlad: The demon king Hiranyakashipu considered himself to be immortal and wanted to be worshipped as a God. He didn’t like the fact that his son Prahlad was an ardent devotee of Lord Vishnu. Hiranyakashipu tried several ways to kill his son but every time Prahlad was saved by Lord Vishnu. When things went extreme, Lord Vishnu took the form of half-lion and half-man (Hiranyakashipu had a boon of not being killed by a human being), and He killed Hiranyakashipu. In this way, good triumphed over evil and the day is celebrated with colors.

Legend of Radha Krishna: Another story says that Holi is associated with Lord Krishna. Lord Krishna fell in love with Goddess Radha but because of his darkish blue complexion, he feared that Radha would not love him as she had a fair complexion. She then told young Krishna to colour her face so that her face also becomes dark. The naughty Krishna was very happy with this suggestion and took great fun in applying colours not only on Radha and but also on other gopis. This tradition of applying colors to one another continues ever since then.

Gulal, abeer and pichkaris, sweets like gujiyas are synonymous with the Holi festival in every part of India. Everyone loves to play with colourful colors and don’t mind being drenched in colorful water. This is the time when people gather to bond together, leaving aside their past differences if any. Young, old and kids, everyone enjoy a lot in this festival.

Holi is also one of the best festival tours of India. You can book a tour to any state of India of your choice and explore colourful India during the Holi festival. While Holi is celebrated all across India, some unique Holi celebrations deserve special mentions. If you are planning for a Holi Festival Tour 2023, you can book your tickets in advance to these places.

Experience Holi Festival with Truly India, check out our tours 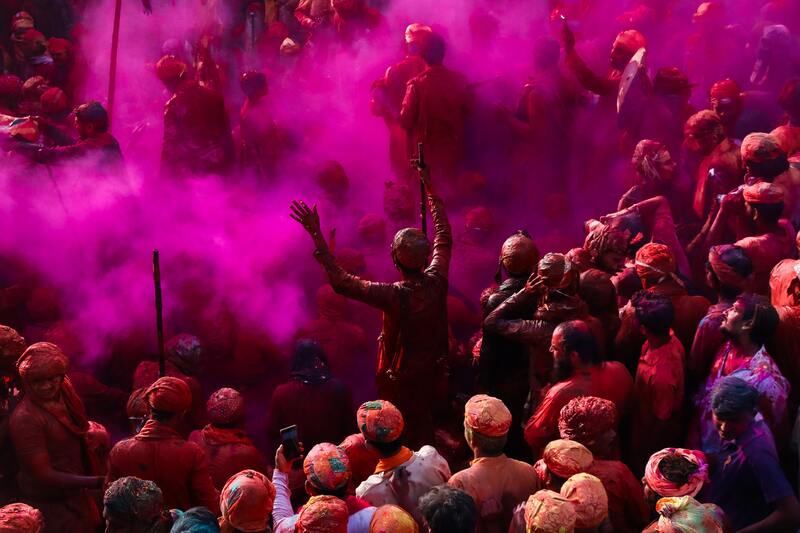 Holi in Vrindavan, Mathura is something worth visiting. Make a Holi Festival Tour to Vrindavan and Mathura. The birthplace and the place where Lord Krishna grew up becomes all the more beautiful during Holi time when thousands of people throng to celebrate holi. All temples of Mathura Vrindavan like as Dwarkadesh, Banke Bihari are decorated with flowers, giving an altogether a festive and religious feel. One special mention here is that the festival of colors is celebrated by the widows too in these temples. They play with dry colors and flowers.

Holi festival in Jaipur and neighbouring areas of Rajasthan is celebrated on a grand scale on the second day. A Holi festival tour to Rajashthan is not to be missed. Jaipur, Ajmer, Udaipur, Jailsalmer – all cities of Rajasthan wore a festive look on Holi. Holi is referred as the Dhulendi festival in Rajasthan. The commemoration of Dhulandi witnesses extreme enthusiasm and grandeur. The forts and palaces in Rajasthan looked beautiful in multiple colors, as if it were a canvas. The State Tourism Department too make special arrangements on the occasion of the Dhulendi festival in Jaipur to add more fun to the festivities.

Laathmaar Holi in Barsana and Nandgaon

According to the legend, Lord Krishna who stayed at Nandgaon wanted to spray the colors on his beloved Radha and other gopis. But, as Krishna and his friends entered Barsana, the birthplace of Radha, they were greeted in fun with sticks (lathis) by Radha and her friends. The same tradition is followed during Holi time. Every year, the men of Nandagaon (considered as son-in-laws) on the occasion of Holi visit Barsana and they are greeted by women with colours and lathis. Bright yellow bundi ladoos are thrown at each other in the temples at Barsana.

In West Bengal, Holi is relentlessly linked with Shantiniketan. Basanta Utsav at Shantiniketan is an event that has to be experienced and felt. There is a riot of colours everywhere. People are dressed in colourful traditional attires. Women decorate their hair with palash flowers. Holi festival welcomes the spring with open hearts and the colour yellow spreads all around. The whole of Shantiniketan echoes with the tunes of Rabindra Sangeet and the smell of ‘abir’ (dry colours) spreads everywhere. A trip to Shantiniketan during holi festival is worthwhile.

Though Holi is celebrated elaborately in North India, in South India, it is not celebrated with much enthusiasm. In Kerala it is referred as Manjul Kuli, celebrated in Gosripuram Thiruma’s Konkani Temple. Devotees visit temple on the first day of Holi and on the second day, people spray coloured water, made of turmeric and water, on each other, and dance on traditional folk songs. In Karnataka, it is known as kamadahana or kaamannana habba where Holi is celebrated not with colors but instead fire wood is collected and burnt, which means you are burning kaamanna

Colours are an essential part of one’s life, especially to get rid of the monotonous aspects of one’s life once in a while. Holi is one such celebration when colours take the centre stage and celebrates love, spring and the victory of good over evil. Book a Holi Festival Tour Package with the best Inbound tour operator in India and have a glimpse of colorful India this Holi 2023.