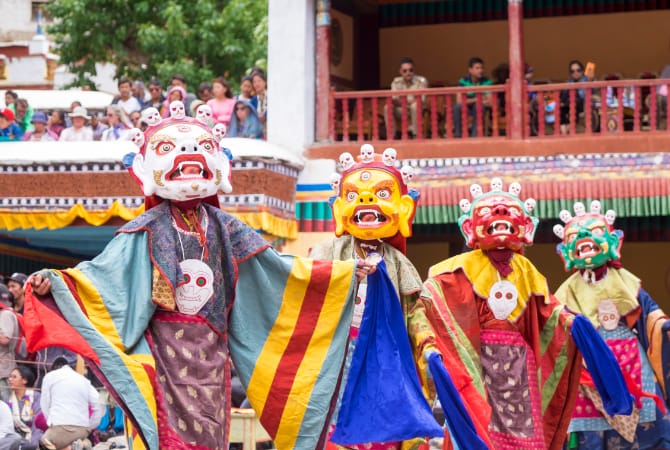 Hemis Festival is one of the most important festivals of Ladakh, celebrated to mark the victory of good over evil, at Hemis Gompa, one of the most widely-visited monasteries of Ladakh. The Hemis Festival is celebrated not only by the local Buddhists of Ladakh but also by Buddhists spread all across India and abroad, including the tourists. It has become of the most popular tourist festivals of the country as it draws lakhs of tourists from all across the globe during the festival time. An annual festival celebrated with great pomp and show, it is held on the 10th day of the fifth month of the Tibetan calendar, which usually falls in the months of June or July. Hemis Festival 2023 dates are 28th and 29th June 2023.
If you are planning for a trip to Ladakh, then book a tour to Ladakh 2023 during the Hemis Festival time. A Hemis Festival tour is sure to make your trip to Ladakh all the more memorable when you can enjoy the festival as well as explore the beauty of the place and the monastery, abound with natural beauty.

Highlights of the Hemis Festival 2023

In local terminology, the Hemis Festival is referred as Hemis Tse-Chu. For the locals, these 2 days are days of celebrations with full vigour and enthusiasm. Locals are dressed up in their adorable traditional ensembles and they throng to the Hemis Gompa to offer their prayers to “Second Buddha”. Many religious rituals take place inside the monastery and the locals participate in the different religious ceremonies.

Some of the major highlights of the festival are as follows:

Cham dance: Cham dance is unique to Buddhism and is performed by some members of the Tibetan Buddhist community. The highlight of this dance is the wearing of vibrant silk brocade costumes, masks, and headgears by the artists. In Cham Dance, each artist with his mask on his face represents a deity or protector. Some masks represent dakini and asuras. Hence, the Cham dance is also referred as God dance and it marks the destruction of evil by the Gods through powerful enactment with Tibetan musical instruments like drums, cymbals and longhorns being played at the background. It’s a colourful and impressive dance performance that mesmerise the pilgrims. Cham dance is a significant part of the celebration of the Hemis Festival, in which you will enjoy the glimpse of the performance of Guru Padmasambhava and his eight manifestations.

Chang: Another highlighting event of the festival is the serving of ‘Chang‘, a local liquor to all the devotes present at the monastery. This is a traditional barley wine served to the tourists and Buddhist pilgrims visiting the monastery during the festival time.

Exhibitions: The locals and the tourists can also enjoy the exhibitions and stalls that are arranged on the monastery ground, displaying a whole range of exquisite handicrafts and gemstones, paintings of Ladakh.

Giant thangkas: A major attraction of the Hemis Festival is the Giant thangkas. These giant Buddhisht paintings are unfurled for the public on both the days. This attracts everyone and is one of the most important events to look forward to in the Hemis Festival.  The display of 22 feet high thangka of Guru Padmasambhava, crafted intricately with the finest of silk is a sight not to be missed at all. The Thangkas are beautifully hand painted by local artists and they are huge in size, fluttering all around the Hemis Gompa monastery, giving an altogether festive look to the celebrations.

How To Reach Hemis

By Air: Nearest airport is Leh Airport, 34 kms away from Hemis. From the airport, you can take a cab to Hemis.

By Train: The nearest station is Jammu Tawi Railway Station and take a cab from the station to Hemis.

By Bus/Car/Bike: Many travel enthusiasts also take road trip to Ladakh to enjoy the Hemis Festival and this ride also has its own unique charm.

If you haven’t visited Leh-Ladakh, the Hemis festival is the best way to get to know the culture of the place and enjoy a soul-touching experience! Book a tour to Ladakh to experience the Hemis Festival 2023 and as a tourist, you will definitely consider it as one of the most vibrant festivals of the country. Book your Hemis Festival Tour 2023 to Ladakh at the earliest with the best inbound tour operator in India.