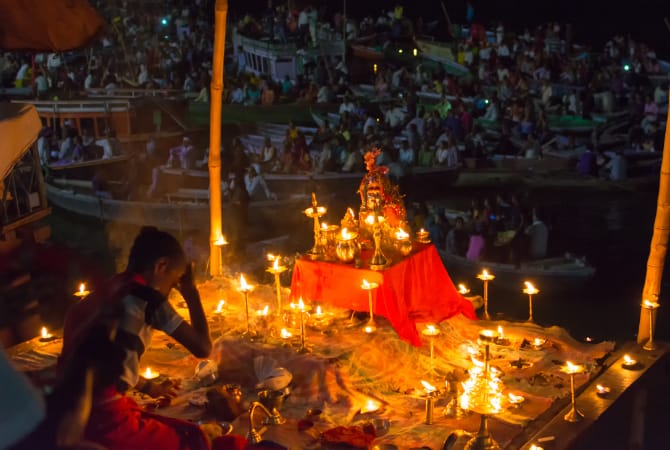 Ganga Dussehra is one of the most important religious festivals of the country, celebrated on the banks of River Ganga. Ganga Dussehra is celebrated in 4 states in India – Uttar Pradesh, Uttarakhand, Bihar, and West Bengal. However, Ganga Dussehra at Haridwar in Uttarakhand is considered to be the most elaborate and extravagant one that entices people from all parts of India to be a part of this festival. Dedicated to River Ganga, Ganga Dusshera festival is organized in the months of May-June every year by State Government of Uttarakhand. This annual festival is a celebration for 10 days on a grand scale which in today’s time is enjoyed not only by the Hindus in India but also tourists from international destinations.

Ganga Dussehra or Dasar Festival starts on the Amavasya night (waxing moon) which usually falls in the month of May/June and the festival continues for 10 days and ends on the Dashami tithi as per Hindu Calendar. Ganga Dussehra 2023 dates are from May 30th to June 8th 2023. If you want to explore the rich cultural traditions and rituals of Hinduism, then making a tour to Haridwar, Uttarakhand is a worthwhile experience for an enriching and spiritual experience.

It is believed that River Ganga descended from heaven to earth on the Amavasya night and hence, this day marks the beginning of Ganga Festival. The festival is dedicated to the worship of River Ganga.

Ganga Dussehra festival on the banks of River Ganga in Haridwar is a heart-warming experience if you get to witness it. Organized by Uttarakhand Tourism and state government, Ganga Dussehra festival is a way of paying tribute to the river and enriching the rich cultural heritage of our country.
The pure river Ganga has an end number of inspiring tales associated with it. This mystical river has its own unique history. Hindus also refer it as Maa Ganga.

A dip into the river is considered very auspicious. On Ganga Dussehra time, tourists throng to Haridwar to pay tribute to the river. Plunging into the river is considered a must for pilgrims, devotees, and tourists as there is a popular belief that it gets rid of sins in your life and represents a fresh beginning. Dussehra signifies ten Vedic Calculations manifesting Ganga’s supreme power to atone all the sins.
Haridwar has always been associated with the existence of the revered River Ganges. During Ganga Dussehra festival, the entire city comes to life. The streets, the small lanes, shops and houses all wear a festive look.
The Ganga ghat is beautifully decorated. Ganga Dussehra is also referred as ‘Gangavataran’. The night time looks all the more beautiful and mesmerising when you see thousands of diyas floating in the river, giving it a shimmering look. Ganga Arati is also not to be missed. During evening time, it is a sight to behold when you see hundreds of beautiful lamps held by the priests, swaying while performing the aarti. The lamps and the diyas, the sounds of the temple bells and the conches (shanks), and the Arati – all combine together to create an ambience of peace, spiritualism and beauty. You get goose bumps when you hear and see the Arati at the bank of the River Ganga, which is one of the main highlights of the Ganga Dussehra festival.

Devotees from all across the country, the tourists and the locals get engaged in various kinds of social sacred ceremonies and religious rituals that are uniquely conducted during the festival of Ganga Dussehra.
Haridwar is well connected to all the major cities in India by road, rail and air. The nearest airport is Jolly Grant Airport in Dehradun. The Ganga Dussehra is a popular Hindu festival celebrated with great zeal and enthusiasm in Haridwar in Uttarakhand. Today, Ganga Dussehra is one of the best festival tours in India. Book a Ganga Dussehra Festival Uttarakhand Tour with the best inbound tour operator in India for an exciting religious and fun trip on the banks of River Ganga. Tourists from across the globe visit Haridwar during this time and a well-planned Ganga Dussehra Tour Package will help tourists to explore the enriched heritage and culture of Haridwar, Uttarakhand in a better way.