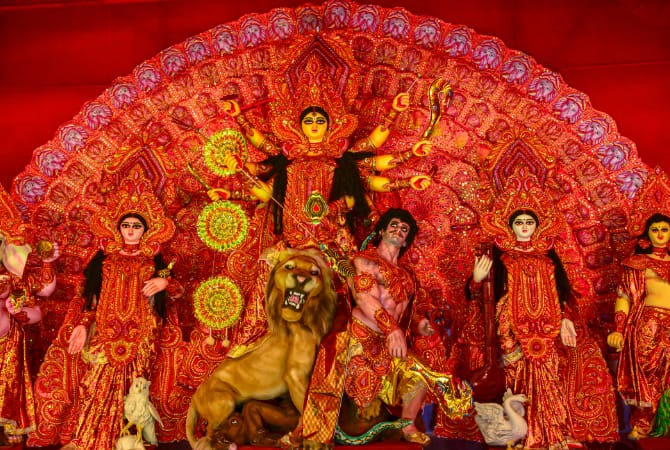 Durga Puja, one of the most significant Hindu festivals, is celebrated in major parts of India as well as abroad with great pomp and fervour. But Durga Puja celebrations in Kolkata, West Bengal definitely rules the chart in terms of its popularity. Durga Puja in Kolkata is the oldest and the grandest of all festivals celebrated in the capital city. This annual festival is celebrated in the month of Ashwin, that usually falls in the months of October or November. Kolkata Durga Puja is one of the best festival tours in India. Making a tour to Kolkata during Durga Puja is one of the best times to visit the city of joy, to explore the rich culture and tradition of the state capital in a better way. Durga Puja 2023 dates are 15th to 23rd October 2023. Durga Puja 2024 dates are 3rd to 111t October 2024.

The festival symbolizes the home coming of Maa Durga to her maternal home from Mount Kailash, along with her children Ganesha and Kartekiya and her two sisters, Maa Laxmi and Maa Sarasawti. The festival is celebrated to welcome her home wholeheartedly. It also celebrates the victory of good over evil as Maa Durga slays the demon Mahishasura during this time.

Nothing can be compared to the Durga Puja celebrations in Kolkata. The whole city comes to life during the 5 days of celebrations. The entire city wears a festive look with various pandals at various places organizing the festival. For Bengalis, Durga Puja is not only meant for worshipping Maa Durga, but it also brings about a communal harmony as each and every family enjoys this festival to the core, following all rituals and traditions, keeping the cultural integrity of the state intact. The entire city is decked up. Everywhere, there is an ambience of fun, food, festivities and celebrations which the local people and the tourists enjoy to the fullest.

In each year, the celebrations have become more and more grandeur, enticing tourists from all parts of India and abroad to enjoy Durga Puja in Kolkata. Dhunuchi naach, the sound of dhak and fragrance of incense sticks, flowers, beautiful lights and decorations, the food and the innovative pandals and beautifully designed Durga idols – all these make Kolkata one of the most popular festival destinations in India.

A week before the puja, Navratri begins. Goddess Durga idols are almost ready and are being painted except for the eyes. On the occasion of Mahalaya, the eyes are painted on the idols and this ritual is termed as Chokku Daan. As per legends, Maa Goddess come down to earth once the eyes are painted.

On the sixth day of Navratri, which is Mahasasthi, the idols are brought home or to the various public pandals.

On seventh day of Navratri, which is Maha Saptami, the ritual of Pran Pratishta or Kola Bou Bath is done. Kola Bou Bath is the ritual in which a small banana plant called Kola Bou is taken to the river in the early morning for a bath and then it is draped in a white with red border saree and is brought back in a procession and placed near the idol of the Goddess. This is then followed by puja and prayers that need to be continued for the rest of the days of the Durga Puja Festival – Asthami, Navami and Dashami.

In the morning at a specific time, pushpanjali is offered and devotees throng to the pandals to offer prayers. In the afternoon, bhog is served to the devotees and visitors. Bhog is the offering made to the Goddess first and then distributed to everyone present there. This is supposed to be the prasad of Durga Puja. It commonly consists of khichdi, a mixed vegetable curry, a sweet dish like rasgulla or gulab jamun or kheer, fried pakoras like potato or brinjal, and tomato chutney.

The highlight of Kolkata Durga Puja is no doubt pandal hopping. Visiting the various pandals which are beautifully decorated along with the displays of Goddess Durga, each different from each other, is one of the most enjoyable moments of the celebrations.

Most of the pandals are huge in structure and celebrate Durga Puja in a spectacular way with various innovative themes for major part of the decorations.

Preparations of the festival start 1,2 months earlier, when the artisans start sculpting the images of Durga and her family. Pandals are erected in various places of Kolkata. Themes for decorations are decided beforehand. Pandals are in fact larger than life with huge idols of Maa Durga. For visitors, these pandals hop on and off is one of the best ways to enjoy the festival. People are in their best of the best dresses, wearing new clothes, moving from one pandal to another and enjoy the festivities there.

There are hundreds of pandals in Kolkata conveniently connected by the Metro railway. The most popular time for pandal hopping is at night when these pandals are beautifully illuminated. All cultural programs, food, fun, festivities begin during the night time.

Some of the enthralling pandals that you can visit during Durga Puja, Kolkata are as follows:

The traditional “Bonedi Barir” puja is also worth seeing. This is the traditional way of celebrating the puja in the city’s palatial old private mansions and royal homes. In major parts of Kolkata and outskirts, you can experience such puja celebrations. Some popular ones are Sovabazar Raj Bari and Rani Rashmoni Bari in North Kolkata.

Visitors and tourists can witness various cultural programs performed by national and international artists and cultural groups at the various pandals. Reputed singers are invited to perform. There are night-long celebrations with music and dance. Enthralling cultural programmes are held at the stages in the evening, enticing the visitors. Durga Puja Kolkata West Bengal is incomplete without the music and dance.

Pandals have various stalls which become a gifts and shopping galore for the people. Right from handicrafts, handlooms, garments to accessories and home décor, you will find plethora of items to be taken back home as memoirs

There are hundreds of food stalls lined up on the pandal ground. A wide variety of delicacies, especially the local delicacies are served which are attractions for the tourists. For these five days, community pandals offer long list of traditional Bengali food that includes both vegetarian and non-vegetarian delicacies, including the street food. One of the best times to enjoy Bengali cuisine is during the Durga Puja festival.

Kolkata’s Durga Puja celebration is a celebration of 5 days. Your tour to Kolkata will remain incomplete if you don’t witness the Vijaya Dashami. This is the day when the goddess is immersed in the River Ganga. Before taking out the idols from the pandals, there is “sindoor khela” at the pandal when married ladies apply sindoor to one another.

Popularly known as bhasan, you will see large number of people on the streets moving along the trucks where the idols are kept and they smear each other with colours while dancing to popular music. The immersion rituals take place at major ghats and this is something which is definitely not to be missed. Bhasan at Babughat is very popular and it is a sight to behold.

Durga Puja Kolkata West Bengal showcases the beautiful culture of the Bengalis in India. It is a grand celebration to honour the victory of Goddess Durga over evil and her homecoming. Kolkata’s Durga Puja remains as one of the grand festivals of India. Tourists can also opt for tour packages to Kolkata which is worth visiting during the festival time. Contact with the best inbound tour operator of the country to get the best deals and offers for a grand Kolkata Durga Puja Festival tour.