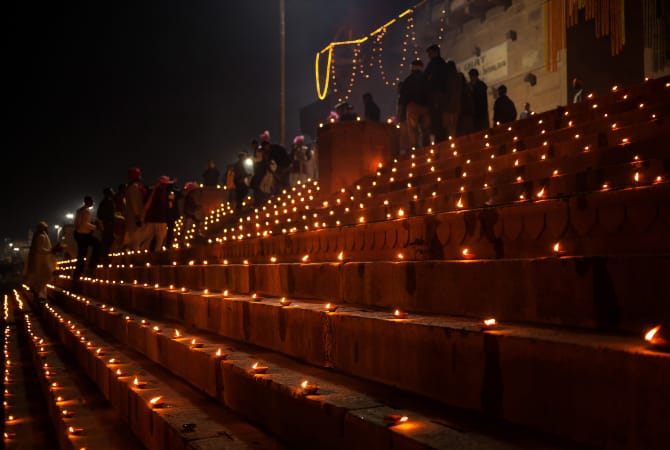 Dev Deepawali in Varanasi, Uttar Pradesh is one of the greatest festivals of the Hindus. It is not to be confused with Deepawali or Diwali, the festival of lights, that signify the victory of good over evil. Dev Deepawali is celebrated 15 days after Diwali and it is believed that this is a festival of the Gods. Gods celebrate Diwali on this day on the river banks of Varanasi. Hence, in Hindu Mythology, Dev Deepawali means “Diwali of the Gods”. This auspicious annual festival is celebrated in Varanasi, India’s ancient religious or pilgrimage centre in the state of Uttar Pradesh. Varanasi is also referred as Benares, Banaras, or Kashi. A tour to Varanasi, Uttar Pradesh during Dev Deepawali time is a heavenly experience for all and is worth taking. Every year, lakhs of people from different parts of India visit Varanasi during Dev Diwali festival. In fact, this festival has become so popular that tourists from abroad too throng to this place to have a glimpse of this spectacular Diwali of the Gods. In fact, in 2022, Varanasi saw the maximum number of tourists from India and abroad, as compared to previous years.
The Dev Deepavali is celebrated on the last day of Ganga Mahotsav, which falls on the full moon of the Hindu month of Kartika (usually in the months of November or December). Dev Deepawali Varanasi 2023 date is on 26th Nov 2023 and Dev Deepawali Varanasi 2024 date is on 15th Nov 2024. It is advisable to book your Dev Deepavali tour package to Varanasi, Uttar Pradesh, India in advance so as to avoid unnecessary rush and high cost and enjoy the scenic beauty of this festival in a peaceful way.

Dev Deepawali is the festival of the Gods, and as per legends, they come down to earth and celebrate on the ghats of Varanasi on the day of Kartik Purnima. They come to celebrate Lord Shiva’s win over the three asuras in a battle – Vidyunmali, Tarakaksha, and Viryavana, together known as Tripurasura.
Rituals
• The ceremony starts by offering prayers to Lord Ganesh.
• Then earthen lamps are lighted by 21 Brahmins and 41 young girls. This is referred as Deepdaan.
• Vedic mantras are chant at the background.
• River Ganga is offered prayers by performing Ganga Aarti.
• Devotees take a dip in the river ganga which is considered very auspicious and is termed as Kartik Snan.
• In many homes, Akhand Ramayan is held where the holy scripture, Ramayana is chanted by brahmins and Prasad or Bhog is served to people once the chanting is over.

Dev Deepawali is celebrated in a grand way. It can be considered as a lifetime experience to witness this celebration. Dev Deepawali tour in Varanasi has become one of the best festival tours in India in recent time. It is a sight to behold. The historic town is transformed into a heavenly space with lamps and lights glittering all around.

The ghats of Varanasi are decorated with thousands of diyas, and the wonderfully-lit stairs look like a staircase taking you to a heavenly abode up above the skies. The colourful earthen lamps all around the place, in the temples and along the stretch of the entire Ganga River bank look just spectacular. There are 15 ghats in Varanasi and each ghat looks just awesome. More than a million earthen oil lamps are lighted in the homes, streets, ghats and the temples. Under the moonlit night, the Ganges look just mesmerising when you see the oil lamps reflecting in the water. Taking a boat ride in the evening time gives you a divinely experience.
The entire Varanasi comes to live during Dev Deepawali. Devotees from all across the country visit Varanasi to offer prayers and perform rituals at Ghats. In recent time, you will also see a huge number of tourists from India and other countries of the world coming Varanasi not only to witness the grand Dev Deepawali but also to have a glimpse of this ancient religious town abound with historical tourist attractions. Varanasi is one of the best religious destinations of India. Pilgrimage tour to Varanasi, Uttar Pradesh is very popular.

It is believed that visiting Varanasi during Dev Deepawali and offering prayers in the river ghats can remove all the negativities inside and around you. Such is the ambience of purity and positivity around that you will be taken to a world of tranquillity and devotion when you are in Varanasi during Dev Diwali. .

Ganga Arti is performed everyday on the ghats of Varanasi in the evening. But during the Dev Deepawali, Ganga Arti becomes more elaborate, and grand. Multi-tiered arti lamps are used by the priests while performing the Aarti and at the backdrop you can hear the Vedic chants, the sounds of the bells, the drums and the shanks (conch shells) which create a divine atmosphere. This is indeed a moment to cherish with for your lifetime.

Ganga Mahotsav is another highlight of Varanasi Dev Deepawali. This is celebrated for 5 days. Dev Deepawali is the day when Ganga Mahotsav ends. Many reputed artists and musical maestros perform at the cultural programs held in the evening. Cultural and religious activities are also held at 15 ghats adding grandeur to the festival. Right from devotional music to classical songs to traditional dances like Odissi, Kathak, and Bharatanatyam – all these can be enjoyed by the onlookers and tourists during Ganga Mahotsav and Dev Deepawali.

The month of November is the best time to visit Varanasi as the weather is pleasant during that time. The spirituality of the place, the surreal backdrop to perform rituals in the ghats during the day time and the magnificent display of lights in the evening – all these make Varanasi one of the most sought-after tourist destinations in India during Dev Deepawali. In 2022, more than 12 lakh tourists visited Varanasi for Dev Deepawali. Hotel tariff rates had gone up to Rs. 1 lakh during this time. Book your Dev Deepawali Varanasi Tour with the best inbound tour operator in India. If you want to avoid last minute rush, it is better to book your tickets in advance to explore this spectacular festival. Dev Deepawali in Kashi is a spectacle that you should never miss in your lifetime.