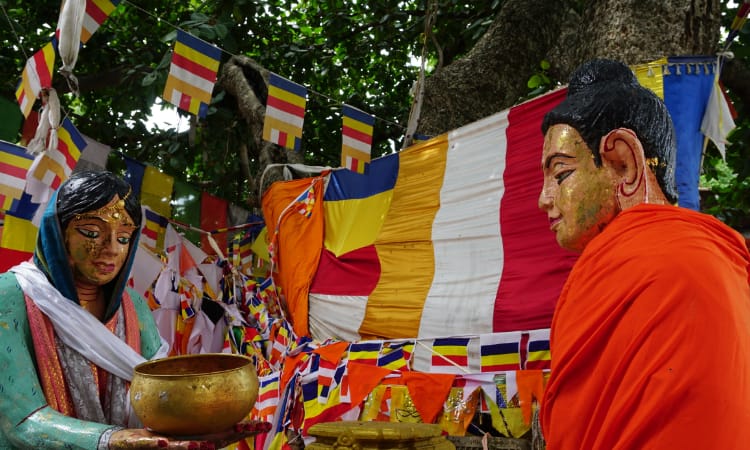 In India, the Buddhist population comprises just about 1% of the entire population. But, when it comes to Buddha Purnima Festival in India, it is one such festival which is celebrated with great devotion and respect not only by the Buddhists population but also by people of other religions. Buddha Purnima is one of the most revered festivals of the country, which every Indian looks forward to, because this annual festival is associated with devotion, spiritualism, meditation, humility and respect.

Buddha Purnima is celebrated on the full moon of the month of Vaishakha on the Hindu calendar, which usually falls in the month of May. It is also referred as Vaisakha Purnima. Buddha Purnima 2023 date is 5th May 2023. In 2022, Buddha’s spiritual legacy of 2,583 years on our planet was completed.

Buddha Purnima is celebrated to commemorate the birth of Lord Buddha or Shakyamuni. The day is significant because it is considered to be the day when Lord Buddha was born in a royal family as Prince Siddharth. It is believed that he attained salvation on this day after years of penance and sacrifice, and it is also the day, when he left for his heavenly abode. Hence, Buddha Purnima is the day which is co-related with the three significant events of Lord Buddha – his birth, his salvation and his death and, hence Buddha Purnima is celebrated with great reverence and devotion. Another noteworthy fact is that on these three major events, there was the luminous full-moon day on the night sky, and hence it is referred as a Purnima day. Buddha Purnima is one of the most auspicious full moon nights for meditation, manifestation and blessings.
For Hindus too, Buddha Purnima is of great significance. As per religious scriptures, Gautam Buddha is considered as the ninth Avatar of Lord Vishnu himself.
Buddhism as a religion gained importance because of Buddha’s teachings of non-violence and respect for life. These practical teachings in life are considered very important in one’s life. Buddha’s teachings are practical teachings, which are an important part of both tradition and modern ideas of progress.

•Some of the highlights of the festival are as follows:
• During Buddha Purnima, not only the Buddhist temples in India but also many temples dedicated to Lord Vishnu are decked up with flowers and lights to make these temples look all the more attractive for the celebrations. Hindus visit temples to offer prayers to Lord Vishnu and they recite Vishnu Sahasranama.
• On the other hand, in Buddhist temples, people following Buddhism visit for prayer meets, chanting and meditations.
• Many events are organized in community halls and temples, highlighting the life and teachings of the Gautam Buddha.
• In some places, marches and physical exercises are performed. The idea behind this is to show gratitude to the Lord for good health and well-being.
• Chanting hymns is very common during the festival time. When many people gather at a common place and chant together, it creates an ambience of spiritualism and peace when the sounds of the hymns echo all around.
• The Buddhist flag is hoisted at Buddha temples and other religious sites.
• Charity and donations are also very common during Buddha Purnima. It is considered auspicious when you donate on this day.
• Another highlighting event of Buddha Purnima is that caged animals are freed on this day to show compassion towards all living beings.
• Meditating on the full moon night of Buddha Purnima is another ritual that many opt for as it is considered to be very effective for a peaceful living.