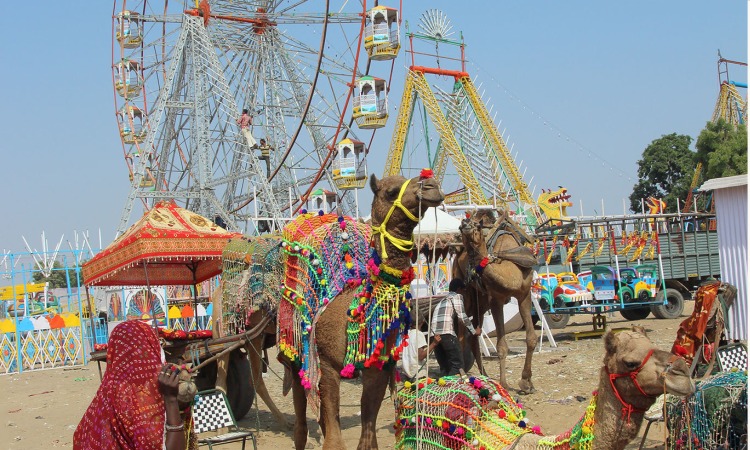 Baneshwar fair is a huge tribal fair organized in a small district by the name of Dungarpur in Rajasthan. This is an annual festival held in the months of January or February, dedicated to Baneshwar Mahadev (Lord Shiva). It is celebrated on the ghats of Baneshwar, which is at the confluence of the Som and Mahi rivers. A 5-day event, the Baneshwar Fair is a religious festival for the Bhils, the tribal community based in Rajasthan and other states like as Gujarat, Madhay Pradesh, Andhra Pradesh, Tripura, Karnataka and Maharashtra. This fair showcases the rich tribal culture of the Bhils, and is referred as the “the Kumbh mela for the tribals”.  It is the biggest tribal fair and is now considered as one of the best festival tours in India. People and devotees from all parts of India visit this fair to have a glimpse of the rustic side of Rajasthan, amidst tribal culture and traditions. Nowadays, tribals from Bangladesh also visit this fair. Baneshwar Fair Tour 2023 is not to be missed at all. It is one of the best festival tours of Rajasthan.

The name Baneshwar originated from the Shiva Linga located in the Shiv temple in Dungarpur. In local terminology, Baneshwar means ‘master of delta’ and the fair is held at the delta which is formed by the confluence of Som and Mahi rivers. The fair originated over 500 years ago when Jankunwari, the daughter-in-law of Mavji, built a Vishnu Temple for her father-in-law as she believed that Mavji was Lord Vishnu’s incarnation. So, this fair is actually a combination of two fairs – one is held at the Shiv Temple and the other at the Vishnu Temple.

Baneshwar Fair has a great religious significance for the Bhils. The entire Bhils tribal community along with other tribal groups and devotees from other regions gather here in large numbers for the festival, and hence it appears to be a Kumbh Mela of tribes. The fair is organised on a grand scale every year and is one of the best known Traditional Festivals of Rajasthan.

Religious rituals:The festival starts early morning on Magh Shukla Ekadashi, when Mathadhish, the priest arrives at the festival site in a huge procession. All devotees take holy baths along with the priest in the river, which is considered to be very auspicious. After the bath in the early morning, the entire tribal community goes to the Shiv temple to offer prayers and do other rituals. They also visit the Vishnu temple. Fruits, flowers, ghee, rice, coconut, jaggery are offered to the shrines, along with cash. A huge religious procession is taken out in which a 16 cm silver idol of Saint Mavji is placed on a horse back and devotees offer their prayers to Saint Mavji. Mathadhish is also revered during this time. Five times a day, aarti takes place in both the temples. One could hear the brass gongs during the aarti time which echo all around.

Cultural programs:In the evening, there is a festive ambience all around when devotees get engaged in spiritual songs and dance. Rash Leela and other religious songs and dance are performed at the temple complex, which are enjoyed both by devotees and tourists. The Bhils sing traditional folk songs in their high-pitched voices the entire night sitting around a bonfire. Entertainment and cultural programs are also organized like as folk dance, acrobatics, magic shows etc. The famous Rajasthani dance, Ghoomar dance that originated from the Bhil community, is performed in the festival by local artists. Swings, merry go rounds and other games and tribal sports are there for the youngsters to enjoy. Various camps are set up near the both temple complexes where pilgrims stay and enjoy the night entertainment.

Shopping bonanza:Various small sized kiosks and stalls are lined up where antiques, jewellery, and other local items can be purchased. You can explore a Tribal market here for gifts and souvenirs. Dungarpur is famous for its skilled goldsmiths and silversmiths and their craftworks like as lacquer-painted toys and picture frames, which are sold in the tribal market.

How to reach Baneshwar?

The Baneshwar fair takes place at the delta which is one and a half km away from Nawa Tapra village. The nearest bus stand is Sabla Bus stand. Baneshwar is at a walking distance from Sabla bus stand. There is no means of transport once you reach the stand and you have to walk the stretch. Special provisions are made by private and Rajasthan roadways buses during Baneshwar Fair.

The Baneshwar Fair is all about fun and entertainment, along with a religious touch to keep the cultural integrity of the tribal community intact. You can book a tour to Baneshwar Fair 2023 well in advance with the best Inbound Tour Operator in India to enjoy this huge festival of the tribal community. It is one-of-a-kind experience for travel freaks to enjoy Rajasthan with tribal people and explore the tribal culture and ritual.