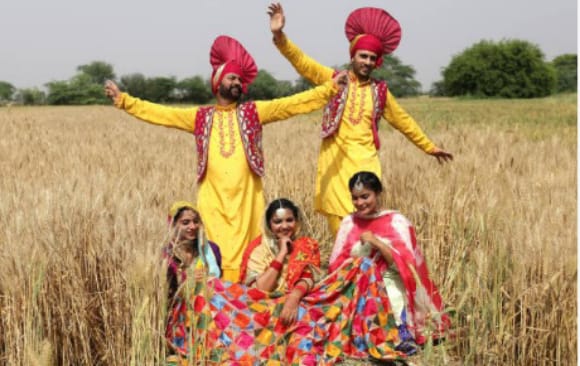 Baisakhi festival is one of the most popular festivals in India, celebrated in the Indian state of Punjab. To be a part of a Sikh festival is an experience worth taking in your life time. The sheer enthusiasm of the community can raise your spirits out of this world. It coincides with Bohag Bihu festival in Assam, Vishu in Kerala and Tamil New Year. Punjab’s Baisakhi is a harvest festival celebrated on the first day of Vaisakh month according to the Sikh Calendar, which usually falls in the month of April. The entire state of Punjab celebrates Baisakhi with great gusto and fervour. An annual festival which everyone in Punjab looks forward to so as to enjoy it to the fullest. Baisakhi Festival Punjab 2023 date is 14th April 2023. A visit to Punjab during the Baisakhi festival gives you a better chance to explore the culture and the rich colourful traditions of the state.

Significance and History of Baisakhi Festival

Baisakhi Festival of Punjab is not only associated with the harvest festival or the Hindu New Year, it is also a festival to celebrate the anniversary for the formation of the Khalsa Community.
Baisakhi festival has a rich history that dates back to 1699. In 1699, when the ninth Sikh Guru, Guru Tegh Bahadur, was publicly beheaded by the Mughals for his refusal to convert to Islam to protect the identity of the Sikhs and the Hindus, his son Guru Gobind Rai took out a protest march with the Sikhs. This rally was carried out on the Baisakhi day. He became the last Sikh Guru, Guru Gobind Singh, and the Guru system was dispelled. The Khalsa community was formed and everyone was advised to adopt the five Ks of Sikhism – Kesh (uncut hair), Kara (a steel bracelet), Kanga (a wooden comb), Kaccha – also spelt, Kachh, Kachera (cotton underwear) and Kirpan (steel sword) and follow the paths depicted on the Granth Sahib, the holy book of the Sikhs. So, Baisakhi festival is a festival celebrated as a tribute and in honour of the Sikh Guru.
Celebrating Baisakhi in Punjab can be considered as one of the most memorable experiences that you can have as it overlaps with the history of the religion of the Sikh community.
Baisakhi was also the day when the infamous Jallianwala Bagh Massacre took place in 1919.

Highlights of the Baisakhi Festival, Punjab

Baisakhi Sikh celebration is celebrated in Punjab and near the border with Pakistan on a grand scale. It is a festival of fun, food, festivities, dance and songs which depict the rich culture of the state. When you are in Punjab during Baisakhi time, you can expect a bonanza of bhangra dancing and folk music performances. All streets, shops, markets and buildings are beautifully decked up with colourful lights.

The festival calls for the celebration of life. Some of the special moments and rituals of the festival are as follows:

The Baisakhi festival is one of the most popular festival tours in India. Experience the beauty of this festival at any place of your choice in Punjab. Some noteworthy places where you can plan your Baisakhi Punjab tour includes Amritsar, Chandigarh, Jalandhar, Anandpur, Bathinda etc. Some prominent attractions for the tourists include:

Book your Baisakhi 2023 Punjab Tour now with the best inbound tour operator in India for a memorable experience and join in the celebrations with the Sikh community.