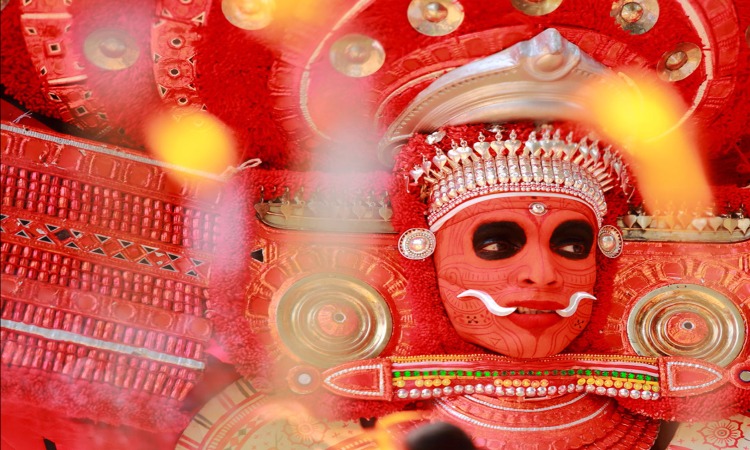 Andalur Kavu Temple Festival is celebrated in Kannur district in the state of Kerala every year. It is one of the most-awaited festivals for the locals in Kerala. The festival falls in the month of February-March, which is the Malayalam month of Kumbham. An annual festival celebrated on a grand scale in Kannur, one of the highlights of this festival is Kaliyattam Thaiyyam performed at the premises of the temple Andalur Kavu. Andalur Kavu Temple Festival is today one of the best traditional festivals in South India.

Significance of the festival

Andalur Kavu is believed to be built by Sage Parasurama, which is considered as one of the incarnations of Lord Vishnu. Andalur Kavu is a temple dedicated to Lord Rama. Kavu is the name given for sacred groves in Kerala and for the people of Kerala, these groves have God’s power that brings in prosperity and success to all. It is a message for humans to stay in harmony with nature. So, they pray to these groves, and during the festival time, special prayers are offered at every “Kavu”. The temple is located in the midst of the grove or kavu, and hence the name Andalur Kavu Temple.

Theyyam experience is just beyond explanation for any visitor. The thaiyyam perform at Andalur Kavu Temple Festival is Kaliyattam Thaiyyam, which is based on the Epic of Ramayana. Whoever visits Kannur during this time can experience an ethereal feeling when they view the Andalur Kavu Theyyam, and at the same see the beauty of the temple around, decorated with flowers, lights and diyas. Depicting the stories of Ramayan, the artists in their vibrant costumes and elaborated masks, performing the dance form with traditional instruments being played at the background is a sight that gives you goosebumps. The whole ambience seems to come alive with sounds of the temple bells, the thaiyyam dancers, the music, and the hustling bustling of the devotees and the tourists. Tourists can deeply connect with the folklore stories of Ramayana.

The thaiyyam experience at Andalur Kavu is one-of-a-kind experience that every art and music lover or an artist look forward to every year. It is one of the most favourite festivals of Theyyam in Kannur not only for the locals but also for people all across India. Andalur Kavu Temple Festival tour is regarded as one of the best festival tours in India. With is popularity being spread globally, Kannur sees a throng of visitors from abroad during this time. The nearest Railway Station is Thalassery railway station, about 4 km away from the temple complex. The nearest airport is Kannur International Airport, about 21 km from the Andalur Kavu temple.

For many travellers, visiting Kannur during the festival time is the best time to visit Kannur as tourists get acquainted with the cultural and religious heritage of the state in a better way and can also enjoy thaiyyan dance performances which are unique and indeed life-time experiences for many. Book your tickets for Andalur Kavu Temple Festival Tour 2023 and cherish lifetime memories.