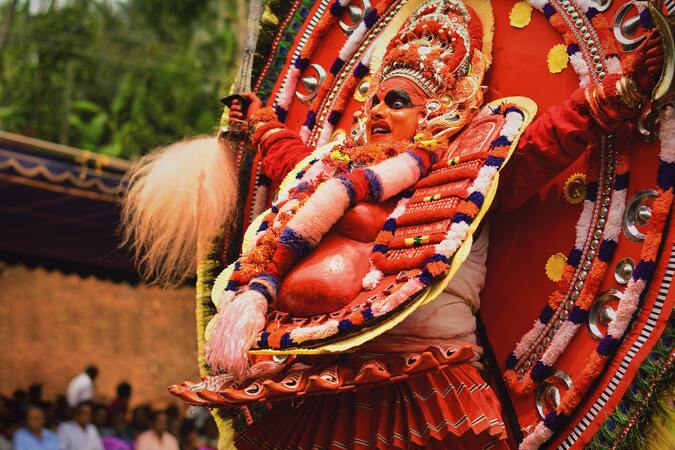 The temples in Kerala are the perfect stage for the splendid Theyyam performances every year. There are more than 100 Theyyam festivals celebrated in Kerala annually. One such Theyyam festival celebrated on a grand scale is the Karamel Muchilottu Perumkaliyattam Theyyam, celebrated at the temple premises of Muchilottu Perumkaliyattam in Kannur, the beautiful coastal city in Kerala. Karamel Muchilottu Perumkaliyattam Theyyam is considered as one of the best festival tours in India today. Tourists from all across India visit Kannur during this time to have a glimpse of this popular Theyyam and explore Kerala’s traditional culture and rich heritage. The Theyyam celebrations spread into every nook and corner of each locality of Kerala and beyond.

The festival date is in accordance with the Malayalam calendar and follow local traditions and customs. Theyyam is celebrated in the months from December to April. The temple becomes a hub for national and foreign tourists, art photographers, art enthusiasts, and others during the festival time. Book your tickets for Karamel Muchilottu Perumkaliyattam Theyyam 2023 now.

Dances performed in the temple is an essential part of Kerala culture. Theyyam is a unique dance form of Kerala, an 800-year-old spectacular dance form, considered as the ritual dance of the Gods of India. It is a celebration of faith, devotion and divinity and celebrated with great enthusiasm every year in varied locations and varied dates. You will find an amalgamation of music, dance, drama and mime in this dance form. As per legends, it has its origin in the ancient Dravidian culture of South India. Theyyam dance is always accompanied by perfect harmony and orchestra of musical instruments like Chenda, Elathalam, Kurumkuzal and Veekkuchenda, which make the dance form all the more spectacular. The performers with their colourful costumes, gorgeous make-up and attractive masks are a treat to the eyes. There are more than 400 forms of Theyyam and each has its unique style, retelling a mythological story in a dance drama format.

The temples in Kerala host Theyyam festivals annually. Karamel Muchilottu Perumkaliyattam Theyyam, an annual festival, celebrated in Kannur district is very popular. One of the popular deities in Kannur District is Muchilottu Perumkaliyattam. Highly decorative figures of the deity attract devotees from all parts of India and the Theyyam is an added attraction where local artists from Kerala perform the dance form. During the performance, the artist is considered as God and devotees ask for his blessings as if they are praying to real God. A fantastic enactment of stories in dance forms mesmerize the spectators. The vibrations of the music and dance echo all around the temple complex which the devotees and the tourists feel and it is an out-of-the-world experience for many.